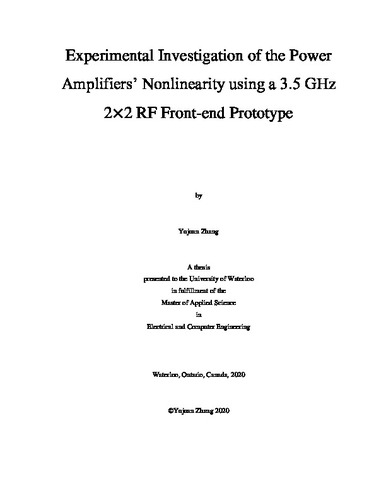 Next generation communication systems will demand extremely high system capacity. Ap-proaches such as complex digital modulation schemes, widening of the instantaneous band-width and massive multi-input multi-output (MIMO) architectures will need to be employed to realize such high capacity systems. However, these approaches impose stringent requirements on the radio hardware. For instance, in conventional wireless transmitters, isolators/circulators are typically used to immunize the radio hardware and its performance from negative effects of the antenna load variation. However, in massive MIMO transmitters, while the antenna active impedance varies significantly, isolators cannot be used due to their unacceptable overhead in terms of cost and space. Thus, within these transmitters the power amplifiers’ (PA) performance in the aspects of linearity, output power and efficiency are significantly impacted by the load modulation introduced by the finite isolation between the antenna elements. To date, studies in the literature have mainly relied on emulating the load modulation in massive MIMO transmit-ters and have used generic PAs rather than those specifically designed for massive MIMO transmission. This work begins by designing a two-by-two RF front-end for a massive MIMO transmitter, comprised of antenna and PA arrays suitable for use in a base station. The antenna array is formed of multilayered patch antenna elements that achieved an enhanced isolation and ex-tended fractional bandwidth of 19 dB and 14%, respectively. The PA array was built using gal-lium nitride transistors and carefully operated in Class J mode. Under continuous wave meas-urements, the PA array element demonstrated high peak-power efficiency of between 54%-66% over the frequency band ranging from 3.2GHz to 3.8GHz. It also showed excellent linear-izability when driven with modulated signals with 200 MHz instantaneous bandwidth. When both the antenna and PA arrays are connected, they form a front-end that was used to study the effects of the antenna load modulation using realistic modulated signals. This study undertook a large set of measurement configurations specifically devised to investigate the effects of cou-pling due to the PA substrate and finite isolation between the antenna elements, as well as the extent of the nonlinearity of the PA elements. Furthermore, a single-input single-output (SISO) digital pre-distortion (DPD) scheme was applied to attempt to linearize the overall response of the PA array. This study revealed that the coupling attributed to the PA substrate had a minor impact on the array’s performance. Furthermore, it highlighted the necessity of jointly designing for both the PA element linearity and the antenna isolation level, so that SISO DPD can be used and MIMO DPD is avoided.