Rejection and Integration: State Reactions to the Evolution of Dionysian Mystery Cult in Greece and Rome 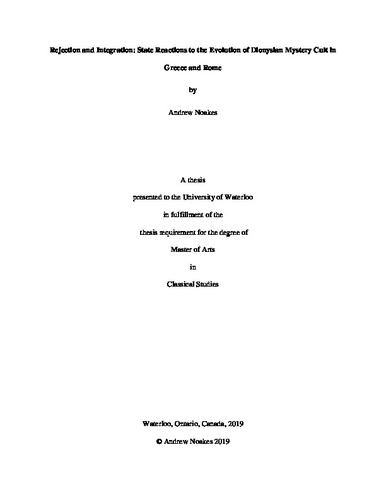 This thesis examines the integration of Dionysian mystery cults into the state religions of Greek polis and the Roman Republic. The cults are often portrayed as controversial and immoral in myth and literature, but the official reactions of various ancient city states never restricted the cult’s rituals or showed any concern over moral degeneracy. Rather, official reactions from the state pertained solely to leadership and organization of the cults. This thesis proposes that the reason for this is that Dionysian mystery cults provided an opportunity for women to obtain leadership, authority, and self definition through a means that was usually restricted to only a small number of women who obtained official state priesthoods. Therefore integration of the cults and restriction on leadership was the most common reaction, with some allowances still made for the cults to exist in private forms. When this opportunity for leadership, authority and self definition was opened up to men, as in the case of the Roman Bacchanalia, the state reacted much more harshly since the cult now provided a social structure that undermined those of the Roman Republic.

Andrew Noakes (2020). Rejection and Integration: State Reactions to the Evolution of Dionysian Mystery Cult in Greece and Rome. UWSpace. http://hdl.handle.net/10012/15475