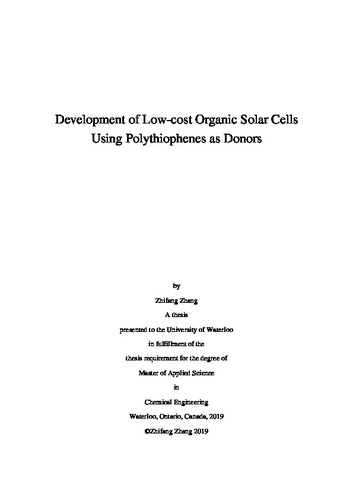 The need to develop sustainable, eco-friendly energy sources is a major driving force in the development of efficient photovoltaic cells. Organic solar cells are a relatively new solar energy technology compared to their inorganic counterparts and have many desirable properties including light weight, easy fabrication and potential for large-scale manufacture. Till now many semiconducting polymers have been synthesized and investigated extensively. One of the widely common donor polymers is P3HT, which has been used with fullerene-based acceptors as BHJ blend systems in OPV. However, because of the high cost and weak absorption of fullerene-based acceptors, non-fullerene acceptors have been investigated as promising alternatives. ITIC, as a representative of non-fullerene acceptors, exhibits broad strong absorption and high electron mobility. Although the ideal PCE is 9%, the highest PCE of P3HT:ITIC obtained till now in literature is 1.25% only which may be due to the recombination of free charges. In this thesis, we tried to overcome the recombination of free charges by using P3HT with lower regioregularity (P3HT rr~85%) which would increase the interaction between donor and acceptor and help to enhance charge transfer. Interestingly, organic solar cells with P3HT (rr~85%):ITIC as the active layer approached a PCE (Power conversion efficiency) of 1.33% which is significantly higher than P3HT (rr~98%):ITIC device with a PCE of 0.76%. The height and phase AFM images suggested interpenetrating morphology with lower RMS roughness in the P3HT(rr~85%):ITIC blend film, indicating better bulk charge transport properties. Moreover, both hole and electron mobilities of P3HT (rr~85%):ITIC were higher which could be explained by the better bi-continuous network formation at nanoscale. Consequently, P3HT (rr~85%):ITIC exhibited higher short circuit current density (Jsc) resulting in better performance. In order to balance the needs of low cost and high performance, our group synthesized two novel donor polymers (P-TOBT-1 and P-TOBT-2) with simpler synthetic route and lower cost and the PCE based on the OSCs reached 9.04% after optimization. To the best of our knowledge, this is the lowest synthetic cost with high PCE above 9%. PTOBT-1 contains only Z configuration in the side chain while PTOBT-2 contains both Z and E configurations. The Voc for the blend of P3HT:ITIC was 0.53 V, while a significantly higher Voc of up to 0.90 V was obtained with P-TOBT-1 and P-TOBT-2 as donors. Because of superior bulk charge transport properties, P-TOBT-1:ITIC showed higher Jsc 19.86 mA/cm2 resulting in a better PCE (9.04%) than P-TOBT-2:ITIC (PCE: 6.32%) , which may be caused by higher crystallinity and smoother morphology.