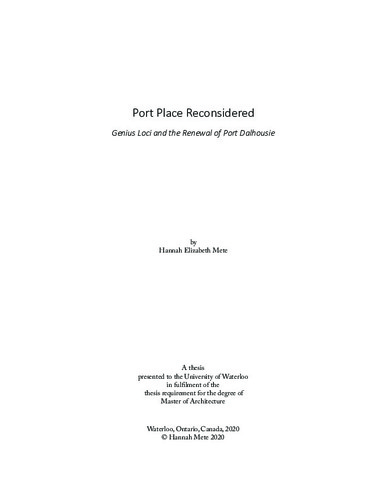 Port Dalhousie, a neighbourhood of St. Catharines located on the southern shore of Lake Ontario, has in recent years experienced an economic, cultural, and social decline. Once the northern terminus of the Welland Canal, and a popular tourist hotspot, Port Dalhousie has undergone a loss of identity and a lack of vision for the future due to a diminished Genius Loci. This thesis posits that the Port Mansion, originally a hotel and operating as the social focal point for Port Dalhousie throughout its lifetime, represented the physical manifestation of the Genius Loci. With the demolition of this historic building, the Genius Loci was weakened, and man as the agent of this prolific force can no longer be informed by it, resulting in incoherent development proposals and the uncertain future of this place. In this text, the concept of Genius Loci, defined simply as “the spirit of the place,” is outlined, the historical and physical contexts that Port Dalhousie exists within are illustrated, and the stakeholders connected to the site are identified. All are considered holistically to ultimately propose a re-imagining of the Port Mansion as Port Place; a campus of buildings and a modest park which attempt to reinstate the Genius Loci of Port Dalhousie. By reimagining the Port Mansion as a piece of social infrastructure which engages multiple different demographic groups, the proposal allows the Genius Loci to speak through the actions of the users, therefore restoring its role within the community and securing its advantageous presence into the future.