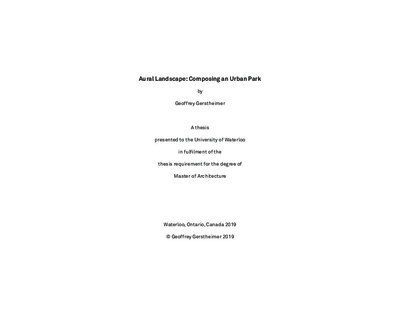 As a culture, the Western World has placed a negative stigma on noise, which has lead to the disregard of the urban soundscape. Researchers have been studying and theorizing ways of understanding the urban sound environment for many years, adding to the knowledge of listening. This thesis aims as a whole to act as a general tool to educate the public on the urban sound environment to aid in discriminate listening. Building on existing research, studies and theories on the urban sound environment it explores the cities inventory of sound possibilities from a psychological, sociological and architectural point of view and asks: what are the forms of constructed space that shape the sound opportunities of our urban environment? Based on a review of the literature of soundscapes, aural architecture and sound waves and the exploration of precedents that explore sound installations and transcoding, multidisciplinary experiments were conducted involving sound, using quantitative tools such as acoustical software, frequency spectrums, soundclips, physical models, listening exercises, cymatics and mathematics. Findings from the experiments demonstrated new relationships between the urban sound environment and musical composition techniques. This resulted in a final design study of Washington Square Park using a stochastic methodology from both an architect’s and composer’s point of view, resulting in a synthesis of layering that demonstrates the cultivation of previous research adding to the body of knowledge of our urban sound environments. Further reflection is done in the form of an essay on how sound research impacted the author’s psychological and sociological view not only as a designer but as a listener. This essay is a testimony to the significance of shifting our culture’s aural behaviour and encouraging continued research into our urban soundscapes.