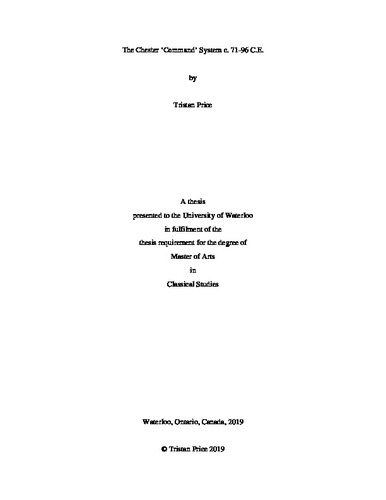 This thesis centres on the operations of the Chester ‘command’ system in the region of North Wales, roughly from the first year in which Petilius Cerialis served as the governor of Britain to the death of Emperor Domitian. Despite the several auxiliary forts that were occupied simultaneously during this period, seven military stations have been selected to demonstrate the direct application of Roman rule in the region imposed by a fortified network of defences and communications: the legionary fortress of Chester, the fortress at Wroxeter, the fort at Forden Gaer, along with Caersws II, Pennal, Caernarfon, and Caerhun. After the fortress at Wroxeter was abandoned c. 90 C.E. the fortress of Chester held sole legionary authority and administered control over the auxiliary units stationed in North Wales and the Welsh midlands. Each fort within this group was strategically positioned to ensure the advantages of its location and environment were exploited. The sites of Wroxeter, Forden Gaer, Caersws II, and Pennal were not only placed on the same road (RR64) to maintain a reliable communications system across the Severn valley, but the paths through which indigenous people could travel north or south were limited as each military post controlled access to the preferred land routes over the River Severn and the River Dyfi. The fortress at Chester, and the forts of Caerhun and Caernarfon, however, were northern coastal sites that utilised large ships for transport and for their garrisons to exchange goods between one another. While no naval base has been officially identified on the west coast of Wales, Pennal was accessible to ships and a 17th century description of a potential Roman port facility near the site suggests provisions were also imported by this fort. Each military station described here was designed to preserve Roman political and military supremacy in North Wales beyond the late-1st century C.E.