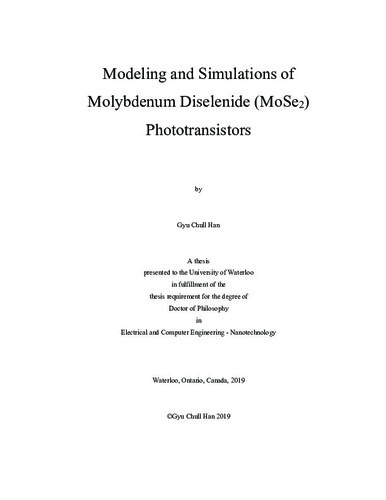 Since the first demonstration of graphene, two-dimensional (2D) materials have attracted gigantic attentions from the electronic device community. Various 2D materials showing metallic, semiconducting, and insulating properties have been reported. Among them, transition metal dichalcogenide (TMDs) is one of the most latent 2D materials, having excellent semiconducting properties with electronical, optical, and mechanical advantages. Due to their intriguing properties, TMD devices have been investigated for various applications such as switching devices or sensing applications. In particular, 2D TMD phototransistors exhibit high optical device performance, demonstrating their potential for future wearable devices and health monitoring systems. In this thesis, to investigate optical properties of the 2D TMDs phototransistors, comprehensive theoretical studies are performed based on analytical modeling and numerical simulation. I introduce overall simulation schemes showing self-consistent iterative calculations between transport and electrostatics. Non-equilibrium Green’s function (NEGF) transport method is mainly used for device simulations in this study. I discuss two major methods to calculate electronic states of channel materials in the devices: effective mass and tight-binding approximations. I develop new method, modified effective mass approximation, for maintaining rigorous calculation and having low computational cost. Following that, the Poisson’s equation solver is presented to calculate electrostatics. I first analyze unique device performance of fabricated 2D TMDs phototransistors. To confirm origin of uncommon p-type behavior and large photoresponsivity of chemical vapor deposition (CVD) grown multilayer MoSe₂ phototransistors, density-of-states in the band gap is extracted by temperature-dependent analysis. Next, physical models for optical behaviors of MoSe₂ phototransistors under illumination are developed, considering two key mechanisms: photoconductive (PC) and photogating (PG) effects. The models are used to analyze large photoresponsivity of multilayer MoSe₂ phototransistors fabricated by CVD under Mo-rich condition, where it turns out that observed Mo interstitials on the materials are critical factor of large optical response. Then, the MoSe₂ phototransistor is computationally simulated based on NEGF method with trap models. PG effect is deeply examined from the microscopic perspectives. I also simulate optical device performance such as photoresponsivity and detectivity. After that, for further improvement of the device performance, dependence of photoresponsivity on material properties is investigated. The simulation methods can be extended to other phototransistors based on new materials to strengthen the photoresponsivity or PG effect. A phototransistor with hexagonal nano-patterned multilayer MoS₂ as channel layer is simulated to scrutinize high photoresponsivity of it. Material and device simulations are carried on to specify energy level of a trap state mainly contributing to the large photogain. We study dependence of photocurrent on energy level of trap states with realistic capture cross sections. Overall, MoSe₂ phototransistors are physically modeled and numerically simulated. Those trends of models and simulation results successfully reproduce those by experiments, providing in-depth understanding of underlying photoillumination effects. The proposed modeling and simulators can not only accurately predict the photoelectric performances of the future 2D phototransistors but also deeply quantify and analyze the internal physical mechanisms, providing a useful framework for the improvement and optimal design of popular 2D phototransistors for a wide range of applications.