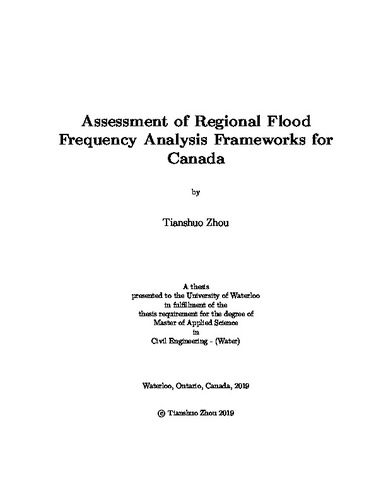 Floods are a devastating natural disaster causing economic loss and even threatening human lives. A better understanding of floods can lead to improved design of flood mitigation measures. The Natural Sciences and Engineering Research Council of Canada (NSERC) funded the FloodNet Strategic Network to identify ways to improve the resilience of Canadian society to flooding. This thesis is a part of the NSERC FloodNet project on the development of a flood estimation manual for Canada. The objective of this thesis is to assess and improve regional flood frequency analysis (RFFA) frameworks developed in the NSERC FloodNet project. The annual maximum (AMAX) RFFA framework is compared with at-site flood frequency analysis (FFA) for 1114 Water Survey of Canada hydrometric stations across Canada. Different flood-related attributes were explored to find quantitative measures to identify stations for which the AMAX RFFA performed poorer than at-site FFA. The results show the AMAX RFFA framework performs better than at-site FFA for 81.69\% of sites across Canada. The average basin slope, lake effect, and L-moment ratios are effective quantitative measures to identify sites where at-site FFA performs better than AMAX RFFA. The peaks-over-threshold (POT) RFFA framework is compared with the AMAX RFFA framework for 89 sites having more than 50-years of record across Canada. For 78 of 89 long record sites, the POT RFFA performs better than the AMAX RFFA. For sites where the peaks per year of the POT flow series is greater than 1.5, the POT RFFA performs better than the AMAX RFFA. The Rocky Mountain region was identified as a problematic region where both RFFA frameworks did not perform well. An alternative RFFA framework, the POT-Rocky RFFA, was proposed for the Rocky Mountain region. The POT-Rocky framework performs better or at the same level as the AMAX and POT RFFA frameworks for most of the long record sites within the Rocky Mountain Region.