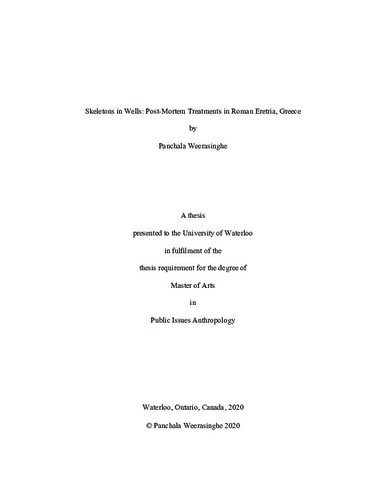 This thesis is an osteoarchaeological analysis of adult and juvenile human skeletal remains (more specifically, crania and long bones) that were excavated by the Swiss School of Archaeology from a 3rd century CE Gymnasium well at Eretria during the field seasons of 2016 and 2017. The bones were commingled and incomplete; attempts to identify individuals yielded little additional information. Personal criteria such as age, sex, pathology, as well as taphonomic and other changes on bone were recorded. The data collected from the skeletal remains are used to determine whether these individuals were deposited in the well as skeletonized individuals or as whole bodies. The level of breakage, the sharp force trauma, and the missing elements of bone suggest that the adults and juveniles entered the well as skeletonized individuals. It is likely that these individuals were buried elsewhere first and that the deposit in the Gymnasium well is a secondary internment. This thesis further argues that the individuals that were deposited in the Eretrian Gymnasium well received a variation of a “normative” manner of burial in ancient Greece as opposed to a form of “deviant” burial that human skeletal remains in wells have come to be associated with in archaeological literature. The thesis will explore why the term “deviant” should be broadened when it is being applied to burial practices.