Mathematical approaches to the study of cellular heterogeneity, treatment design, and immune response in cancer 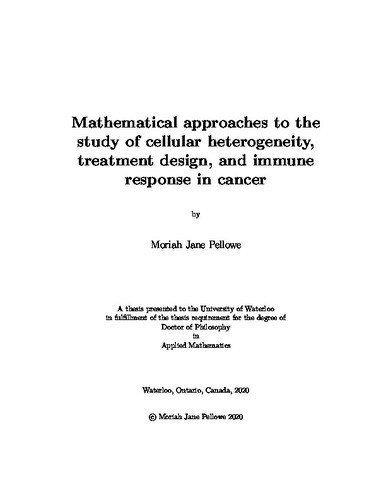 One of the complicating factors in treating cancer patients is the different levels of heterogeneity involved. In this thesis, we use a combination of mathematical methods (in silico experiments) and experimental data (in vitro and ex vivo experiments) to study cellular heterogeneity, treatment design, and immune response in cancer. This thesis demonstrates the importance and value of interdisciplinary communication and collaboration. In Chapter 2, we develop a framework that uses in vitro and in silico experiments to characterize cancer cell lines and investigate the cellular dynamics during early cancer development for specific cancer cell lines. We demonstrate this process with the breast cancer cell line, MCF-7, and present evidence that progenitor cells are the significant cancer subpopulation during early cancer development for MCF-7 cells. In Chapter 3, we modify and build on the agent-based model of Chapter 2 to characterize the effect of pressure on mammosphere formation with and without the presence of a chemotherapy drug. Our results suggest that pressure induces phenotypic plasticity. In Chapter 4, we identify the Hsp90 protein network as a means by which drug resistance can be overcome in a drug-tolerant cell. We construct a minimal in silico model of this network to design a treatment schedule for docetaxel and radicicol. In silico experiments are used to show that radicicol can overcome the development of drug resistance to docetaxel with the proper treatment sequence, which can be accomplished with a nanoparticle formulation. We present evidence that the intake rate and the decay rate of radicicol are drug formulation properties that will have the greatest impact on increasing the efficacy of the docetaxel-radicicol treatment sequence. In Chapter 5, we investigate the variability in immune system response to anti-PD-1 immunotherapy. In this work, we construct a systems biology model and use sensitivity analysis to identify potential biomarkers for a positive response to anti-PD-1 immunotherapy. We present evidence of the importance of two interaction networks with regards to response to anti-PD-1 immunotherapy: 1) the interaction between cancer cells and CD8+ cytotoxic Tc cells, and 2) the balance between CD4+ Th1 and Th2 helper cells. In each of the chapters, we investigate heterogeneity at a different level: cellular heterogeneity with and without the cell microenvironment, variability in protein expression, and variability in immune system response. By developing an in silico model to describe the biological phenomena, we can investigate the underlying mechanisms at work and provide potential biomarkers and potential improvements that can be tested further.