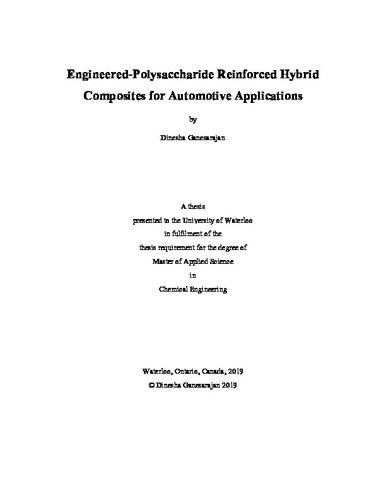 In recent years, the automotive industry has undergone severe changes that challenges their conventional methods of mass vehicle production. This is due to many factors that include legislation that demand for increase in fuel economy and public sentiment for environmental sustainability. Therefore, one of the most prominent solutions to combat the factors mentioned above is to rethink material utilization in automobiles. The purpose of this thesis is to reduce the material weight and increase the environmental sustainability of polypropylene composites for body interior and under-the-hood applications, specifically replacing inorganic sources with naturally, biodegradable filler materials. Two polysaccharide morphologies were explored in this study which includes DuPont’s Nuvolve™ (micro-polysaccharide) and nanocellulose. The natural fillers were incorporated with glass fiber in a polypropylene matrix to yield hybrid composites. The polysaccharide & glass fiber loadings were varied with the total filler concentration not exceeding 30 wt.%. Subsequently mechanical, thermal, rheological and morphological properties were evaluated and compared to Ford Motor Company’s material specification for body interior and under-the-hood applications. The composites were prepared through twin screw extrusion and injection molding where a universal testing machine was used to assess the mechanical properties. Thermal properties were analyzed using thermal gravimetric analysis (TGA) and differential scanning calorimetry (DSC). Melt rheology was evaluated using a parallel-plate controlled strained rheometer. Scanning electron microscope (SEM) was used to study the filler-matrix interface of the hybrid composites. The results showed that for the micro-polysaccharide (Nuvolve™) hybrid composites a density reduction of up to 13% was achievable with improvements to tensile strength and impact strength compared to Ford Motor Company’s material specification. The addition of Nuvolve™ negatively affected the thermal stability of the composites due to the low thermal stability of the polysaccharide. Additionally, the analysis of the thermal transitions of the composites showed that the Nuvolve™ did not have a nucleating effect to enhance crystallization which in turn improves part-production. SEM images showed good filler distribution of Nuvolve™. Nuvolve™ revealed areas of poor dispersion seen as agglomeration up to 100µm; which can lead to poor transfer of stress between filler and the polymer matrix. Glass fibers were also well distributed in the polypropylene matrix with typical fracture mechanisms present such as fiber-pull out. Nanocellulose reinforced hybrid composites showed a greater density reduction above 15% compared to Ford Motor Company’s material specification. The optimal performing composite contained 2.5 wt.% of nanocellulose and 10 wt.% of glass fiber yielding a total filler content of only 12.5 wt.%. The mechanical properties of the optimal formulation agreed with most of the material specification outlined by Ford Motor Company for body interior and under-the-hood applications. Furthermore, the thermal stability was slightly enhanced with the inclusion of nanocellulose compared to neat polypropylene. Similarly, with Nuvolve™, nanocellulose did not show a nucleating effect on the crystallization temperature. SEM micrographs demonstrated agglomeration of cellulose nanofibrils (CNF) and cellulose nanocrystals (CNC) reinforced hybrid composites. The hybridization of Nuvolve™ and nanocellulose combined with glass fiber in a polypropylene matrix yielded high performing composites that offer superior performance properties while permitting lightweighting that provides an intermediate but necessary step towards environmental sustainability within the automotive space.