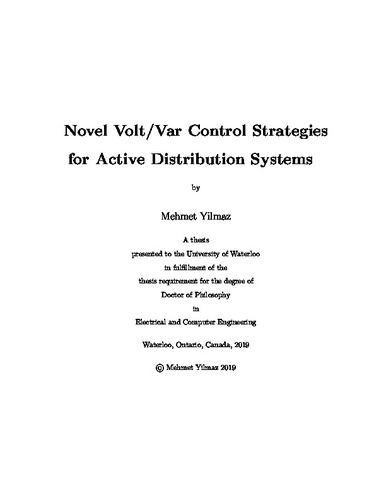 Power distribution networks are rapidly evolving as active distribution systems, as a result of growing concerns for the environment and the shift towards renewable energy sources (RESs). The introduction of distributed generations can benefit the distribution network in terms of voltage support, loss reduction, equipment capacity release, and greenhouse gas (GHG) emission reduction. However, the integration of RESs into electric grids comes with significant challenges. The produced energy from renewable sources such as wind and solar is intermittent, non-dispatchable and uncertain. The uncertainty in the forecasted renewable energy will consequently impact the operation and control of the power distribution system. The impact on Volt/Var control (VVC) in active distribution systems is of particular concern, mainly because of reverse power flow caused predominantly by RESs. RESs can influence the operation of voltage control devices such as on-load tap changers (OLTCs), line voltage regulators (VRs) and shunt capacitor banks (ShCs). It is mainly because of reverse power flow, caused predominantly by RESs. Reverse power flow or injecting power between the regulator and the regulation point can confuse the local regulator controller, which leads to inappropriate or excessive operations. Some of the potential adverse effects include control interactions, operational conflicts, voltage drop and rise cases at different buses in a network. This research project aims to carry out an in-depth study on coordinated Volt/Var control strategies in active distribution networks. The thesis focuses on the problem of Volt/Var optimization in active distribution networks, operated under different operating conditions, by taking into consideration the current distribution system requirements and challenges in the presence of high RESs penetration. In the initial phase of the research project, a generic solution to the VVC problem of active distribution systems was first developed. The primary goal of this generic solution involved the determination of an optimal control strategy based on system status, which was identified from bus voltages. As such, there are three different operating states; normal, intermediate and emergency state. Each operating state has its own control strategy that includes state-related objective functions, such as minimization of power losses, operational control costs, and voltage deviation. For both normal and intermediate state operations, a heuristic-search based optimization algorithm is implemented. In order to be able to take control actions rapidly, a novel rule-based control strategy is developed for the emergency state. In the second phase of the research project, the proposed zone-oriented convex distributed VVC algorithm was developed to address the limitations of heuristic optimization algorithms, including long solution times and the non-global optimal solution. The proposed algorithm is based on chordal-relaxation semi-definite programming (SDP), and divides distribution systems into areas based on customer types, wherein, each zone has its own priorities, characteristics, and requirements. The primary goal is to achieve optimal voltage control for each zone, according to its operational requirements and characteristics. Furthermore, in contrast to many decentralized approaches that require iterative solutions to update global multiplier and a penalty parameter to convergence, this method proposes a novel multi-period hierarchical convex distributed control algorithm, requiring no iterative process and no penalty parameter. Eliminating the iterative solution makes convergence fast, while having no penalty parameter allows for the algorithm to be less human and system dependent. In the final phase of the research project, a 2-stage control algorithm aiming to minimize VR tap movements in convex VVC formulation was developed. In the first stage, the VVC problem is solved for hourly intervals, and VR tap positions are obtained. In the second stage, control horizon is divided into 15 minutes intervals, and the voltage is controlled only by the RESs' active and reactive power adjustment. The tap movement minimization and 2-stage control algorithm eliminates the excessive use of VRs, prolongs the operational life of VRs and reduces the system operational cost. The optimal operation of Volt/Var control devices was investigated in the presented Volt/Var optimization methodology. The proposed research will pave the way for managing the increasing penetration of RESs with different types, technologies and operational modes, from a distribution system voltage control perspective. The proposed methodologies in this thesis have been tested on sample distribution systems and their effectiveness is validated.