On the Response of 7000-Series Alloys to Hot Stamping 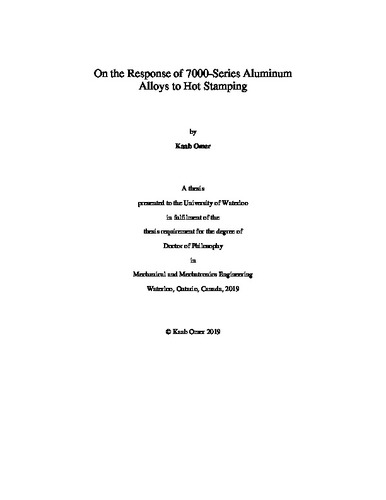 Hot stamping, or die quenching (DQ), of 7000-series aluminum alloys is a metal forming process in which a blank is heated (solutionized) and then quenched and formed in cold tooling. The formed part is then subjected to an artificial aging treatment to reach a targeted final strength (temper). The work presented herein addresses several aspects of the die quenching process chain for two 7000-series aluminum sheet alloys, AA7075 and a developmental alloy referred to as AA7xxx. The thesis addresses: (i) identification of forming process and artificial aging parameters needed to achieve high strength structural properties within an automotive die quenching paradigm; (ii) characterization of high temperature constitutive and heat transfer properties required to accurately simulate the die quenching process; and (iii) development of a model of the work hardening response of die quenched AA7075 as a function of the extent of artificial aging. The effect of the solutionizing duration, the transfer time between the furnace and die, and the in- die quench rate on the subsequent aging response were examined for both alloys. Experiments revealed that both alloys require a solutionizing time of 8 min at 470 °C. For AA7075, a transfer time of up to 6 s (furnace to die) was deemed to be acceptable since this time duration does not appear to result in premature precipitation. For AA7xxx, a transfer time of up to 15 s is acceptable. AA7075 required a minimum quench rate of 56 °C/s, whereas AA7xxx requires only 27 °C/s. Variations in aging treatments following die quenching were also considered in order to obtain desirable yield and ultimate tensile strength properties while accounting for the paint bake cycle (PBC) and its effect on artificial aging response. It was determined that AA7075 could achieve strength properties similar to those a T6 temper if it was aged for 8h at 121 °C followed by a PBC (30 min at 177 °C). AA7xxx could achieve T6-like properties if aged for 3h at 100 °C followed by a PBC and T76-like properties if aged for 4h at 100 °C, followed by a PBC. A detailed characterization of the constitutive behaviour and heat transfer characteristics of these alloys under DQ conditions was performed. Of particular note, this characterization was performed at elevated temperatures while the material was in a solutionized condition. The acquired properties consisted of: (i) the temperature and strain rate dependent stress-strain properties; (ii) the yield surface, and (iii) the heat transfer coefficient (HTC) of both alloys. The stress-strain properties were obtained by subjecting tensile specimens to a temperature-time cycle resembling the DQ process. A novel technique was devised in which the cross-sectional area of the tensile specimens were measured using stereoscopic digital image correlation (DIC) technique. A Barlat Yld2000 yield surface was calibrated using anisotropic properties obtained from shear and tensile tests. The HTC was obtained as a function of contact pressure by performing a series of instrumented quenching experiments in which the temperatures of the blank and die were measured as a function of time. These temperature-time curves were processed using Fourier’s law and Newton’s cooling law to calculate HTC. The acquired elevated temperature constitutive properties and heat transfer coefficients were input to a finite element model of die quenched deep drawn cups. The load-displacement and earring profile results from the experiments were shown to match well with the predicted results from the model. The final step in the DQ process chain was also considered in terms of the final or in-service mechanical properties of die quenched and artificially aged components. A micro-mechanics based model was developed to predict the stress-strain response and work hardening rate of AA7075 as a function of the aging treatment applied. The micromechanics model accounts for precipitate-dislocation interaction during deformation following aging and was validated for a range of multi-step aging treatments. Tensile tests were performed considering tempers ranging from as-quenched up to the peak aged condition, and the model was shown to accurately predict flow stress over the entire range of aging treatments considered.