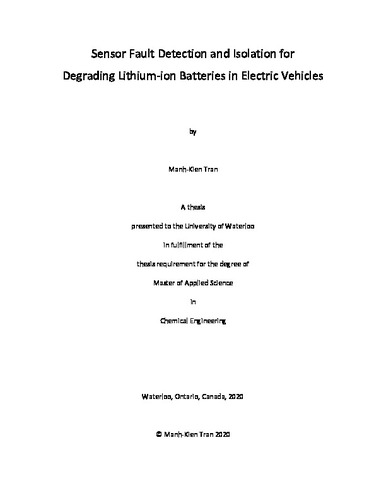 With the increase in usage of electric vehicles (EVs), the demand for lithium ion (Li-ion) batteries is also on the rise. A Li-ion battery pack in an EV consists of hundreds of cells and requires a battery management system (BMS). The BMS plays an important role in ensuring the safe and reliable operation of the battery in EVs. Its performance relies on the measurements of voltage, current and temperature from the cells through sensors. Sensor faults in the BMS can have significant negative effects on the system, hence it is important to diagnose these faults in real-time. Existing sensor fault detection and isolation (FDI) methods are mostly state-observer-based. State observer methods work under the assumption that the model parameters remain constant during operation. Through experimental results, this thesis shows that degradation can affect the long-term performance of the battery and its model parameters, hence it can cause false fault detection in state observer FDI schemes. This thesis also presents a novel model-based sensor FDI scheme for a Li-ion cell, that takes into consideration battery degradation. The proposed scheme uses the recursive least squares (RLS) method to estimate the equivalent circuit model (ECM) parameters in real-time. The estimated ECM parameters are put through weighted moving average (WMA) filters, and then cumulative sum control charts (CUSUM) are implemented to detect any significant deviation between unfiltered and filtered data, which would indicate a fault. The current and voltage sensor faults are isolated based on the responsiveness of the parameters when each fault occurs. Finally, the proposed FDI scheme is validated by conducting a series of experiments and simulations. Various injection times, fault sizes, fault types and cell capacities are considered. The results show that the proposed scheme consistently detects and isolates voltage and current sensor faults at different cell capacities in a reasonable time, with no false or missed detection. The preliminary findings are promising, but in order for the proposed FDI scheme to be utilized in practical settings, more work is needed to be done. The scheme should be expanded to include FDI for temperature sensors. In addition, other battery models as well as other fault diagnosis methods, specifically knowledge-based ones, should be investigated. Furthermore, additional experiments, including longer test cycles and extension to modules and packs testing, need to be conducted to obtain more data to improve the reliability of the FDI scheme.