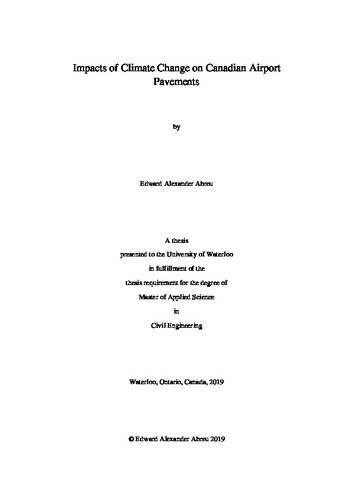 Greenhouse gasses (GHG) emitted by the burning of fossil fuels and supplementary anthropogenic activities are on the rise since the industrial revolution. The world is becoming warmer and more polluted with such gases, which have also caused notable changes in the climate. The environment has been affected by this situation and Canadian airports are no exception. This research aims to present numerous changes of climate at different airports located in various provinces and territories of Canada. The extent of precipitation and risk of flooding, the highest and lowest annual temperatures, the fluctuation of freeze-thaw cycles, and the variation of permafrost are all considered. In addition, this research analyzes the impact of these changes on the operation and/or performance of the airside infrastructure at the selected airports and provides recommended considerations for mitigation and adaptation strategies. The correlation between the changes in climate and the impacts of these to the airfield infrastructure was assessed by an array of laboratory tests in which the samples were subjected to conditions simulating: moisture damage, rise of temperature, and the fluctuation of freeze-thaw cycles. The Hamburg wheel tracking test (HWTT) was performed to evaluate rutting under various temperatures as well as different quantities of freeze-thaw cycles. The tensile strength ratio (TSR) was developed to assess the reduction of indirect tensile strength (ITS) due to freeze-thaw cycles. The ITS results were used to calculate a crack propagation index called IDEAL CT-Index which provided insights into how freeze-thaw cycles affect the crack propagation of flexible airfield pavement infrastructures. The findings of the research indicate that Canadian airports are indeed experiencing a rise of both the maximum and the minimum temperature which is inducing the amount of rainfall to rise as well. Snowfall, on another hand, is varying depending on the locations, being Montreal airport the one experiencing the largest reduction while Winnipeg airport has the most significant growth over the analysed period of 70 years (1950-2019). Considering the developed freeze-thaw cycle analysis, the results did not show a significant increase or decrease, just fluctuations among the years. However, it was noticed that depending on the location, the amount of annual freeze-thaw cycles varied significantly starting from Yellowknife international airport, with an annual average of 9 cycles per year, to Halifax international airport which registered an average of 22 cycles per year. Furthermore, the permafrost analysis presented that Yellowknife and Whitehorse airports are build on top of discontinuous and sporadic permafrost, which makes them susceptible to settlement and fatigue cracking due to the lost of support caused by the reduction of permafrost. The results from the laboratory tests performed on airfield asphalt samples indicated that freeze-thaw cycles and high temperatures induce the asphalt mix to become softer making it more susceptible to rutting and shoving. Freeze-thaw cycles increased premature rutting failure compared to the one for temperature variation. Apart from the fact that as the number of freeze-thaw cycles increased the tensile strength was reduced. It is significant to note that the relationship was non proportional. Hence, the higher the amount of freeze-thaw cycles induced, the less impact they will have on the mix. Additionally, it is substantial to note that freeze-thaw cycles make the asphalt sample softer, also in a non-proportional way. The CT-index increased as the tensile strength was reduced due to the freeze-thaw cycles. As the samples becomes softer, the energy of fracture dissipates which implies a less brittle performance; hence, less susceptibility for the cracks to propagate.