The Impact of Neglected Tropical Diseases (NTDs) on Health and Wellbeing in sub-Saharan Africa (SSA): A Case Study of Kenya 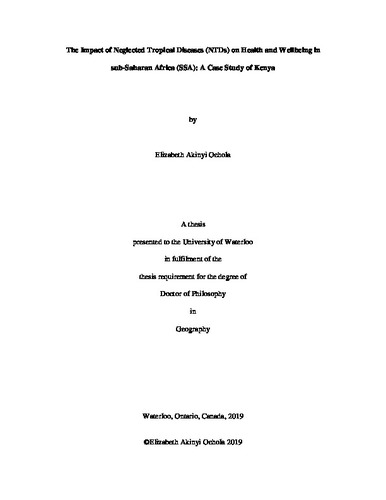 Neglected Tropical Diseases (NTDs) remain endemic to many regions of sub-Saharan Africa (SSA) left behind by socioeconomic progress. As such, these diseases are a proxy for extreme poverty and inequitable access in the political, economic, social, and cultural systems which hinder the attainment of health and wellbeing. NTDs affect marginalized populations who are unable to lobby for their rights and thus have no ‘political voice’ to influence NTD control interventions. As countries embrace and work towards achieving the Sustainable Development Goals (SDGs), the needs of such vulnerable populations need to be addressed in the local and global arenas. Health is a universal right and is central to happiness, economic progress, and wellbeing. As such, it is important to measure the wellbeing of populations living in some of the poorest and most uneven settings and in so doing identify potential indicators for use in a Global Index of Wellbeing (GLOWING) that will capture the inequities represented by NTDs. The research uses primary qualitative data collected from five NTD endemic counties of Kenya. The study interviews key informants (n=21) and focus groups (n=5) consisting of 7-8 people, involved in studying NTDs or infected / affected by NTDs, respectively. Informed by the capability and the political ecology of health theories, the following objectives were addressed: 1) to identify the political, economic, social, and cultural impacts of NTDs on health and wellbeing; 2) to investigate the capacity of local communities to address the burden of NTDs; 3) to identify potential indicators for use in a Global Index of Wellbeing (GLOWING), that will capture the inequities represented by NTDs. The main findings of this research indicate that first, broad structural factors such as devolution of government services, competing interests, political climate; economic opportunity and productivity; marginalization, illiteracy, gender, cultural norms and practices; psychological and behavioral practices; environmental activities, water, sanitation and housing status determine NTD transmission and subsequently the health and wellbeing of populations. Second, even though there are numerous ongoing control strategies for NTDs in the country guided by the World Health Organization (WHO), early physical examinations, proper diagnosis, universal health care, counseling services, and support groups for persons suffering debilitating NTDs are severely lacking. Third, the research reveals that persons living in NTD endemic areas are poverty-stricken, dependent, and reside in areas that have poor health infrastructure. As a result, their wellbeing or ability to live a good life is dependent on access to basic needs, and good spiritual and psychosocial health. This thesis makes important contributions to knowledge, policy, and practice. Theoretically, the research extends social theory (structure and agency) in the largely biomedical field of NTDs to demonstrate that inequities are embedded within the broad political, socio-cultural, and economic systems which enhance NTD infection. Through the capability approach, the research acknowledges the role of human agency in providing context specific solutions to NTDs. Methodologically, the research contributes to the conceptualization and measurement of wellbeing in populations affected by NTDs in Low-Middle Income Countries (LMICs). Moreover, the research uses qualitative rather than quantitative methods (prevalence levels) to highlight the lived in experiences of persons infected and affected by NTDs. In terms of policy and practice, first, the research recognizes the challenges that exist within the broader political, socio-cultural and economic systems and suggests an equity lens in the distribution of basic resources such as water, sanitation and housing. Second, the research proposes poverty alleviation as a means of tackling NTDs for sustained economic opportunity and productivity at the local and national level. Third, the research finds that NTD stakeholders need to engage the communities in/affected by NTDs in order to tackle issues of marginalization and discrimination as well as initiate community-driven interventions for NTD control for enhanced health and wellbeing.