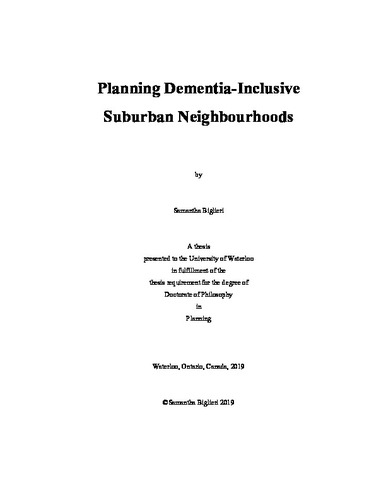 Globally, the population is ageing at a rapid rate, and with that comes the prevalence of dementia. Dementia is an umbrella term to describe a progressive set of symptoms impacting cognition that will affect 115.4 million people worldwide in 2050. In Canada, an estimated two-thirds of the 402,000 people living with dementia (PLWD) live in community, as opposed to congregate living settings (Alzheimer’s Society of Canada, 2010). PLWD are likely to experience a ‘shrinking world’ effect (Duggan, Blackman, Martyr, & Van Schaik, 2008; Shoval et al., 2011), making it essential to investigate supportive features in public space near their homes. These features can enable the positive outcomes associated with continued access to one’s neighbourhood, such as maintaining daily activities, improved physical and mental health, independence, and a sense of dignity (Burton & Mitchell, 2006; O’Connor et al., 2007). Most older Canadians have expressed the desire to age-in-place, and PLWD deserve to access this option and their neighbourhood, just like any other citizen (Fainstein, 2010; Swaffer, 2014). However, there is a paucity of research on the impact of the built environment on PLWD, with the majority of studies being based in Europe, and no research on North American suburban neighbourhoods. Existing studies are critiqued for a lack of attention to the relational experiences of place, and lack of focus on planning processes. Despite this lack of evidence, policies continue to be put forward, such as ‘age-friendly cities’ and the newer ‘dementia-friendly cities’. In response, this dissertation explored how PLWD experience their local suburban neighbourhoods and what planning practitioners can do to support them. The research then focused on three broad objectives: 1) to investigate everyday outdoor practices of PLWD and how they are shaped by their socio-spatial relationships; 2) to identify barriers and supports to PLWD’s mobility; and, 3) to investigate the accessibility of the planning process for PLWD. Using a socio-spatial relational approach, and applying a critical disability lens to Fainstein’s (2010) ‘Just City’ to form a framework for conducting planning research with PLWD, a mixed-methods case study was employed. Participants included seven (7) PLWD from suburban areas in Waterloo Region who were engaged using several methods: introductory and multiple go-along interviews, GPS tracking, travel diaries, experience sampling methods, as well as a field experiment using participant observation and a post-experience interview. The findings are described in three separate manuscripts focusing on each of the objectives. The first manuscript highlights the socio-spatial relational complexities associated with outdoor practices as a PLWD. It was found that PLWD care for themselves in place over time (including the past, present and future); that they care for close others and build interdependencies in place; and encounter with un/familiar others in public spaces is a form of support. This also speaks to the importance of understanding PLWD as complex individuals, disrupting their consistent portrayal in media and academia as dependent (Swaffer, 2014). The second manuscript focuses on what planning practitioners can do to support PLWD, by identifying recommendations to support mobility through land-use, urban design, and wayfinding, as informed by socio-spatial understandings. Finally, the third manuscript found that the open house, a public engagement tool, could be made accessible to PLWD with a few modifications, and considers the implications for using this to make further claims to citizenship for PLWD. This dissertation makes several theoretical, methodological, and substantive contributions to planning scholarship and practice. Overall, this research provides planning practitioners in suburban areas with empirical evidence conducted in a context similar to their own. This could serve as a starting point upon which to begin incorporating dementia-inclusive recommendations in terms of land-use and design, as well as how to alter the planning process itself. Ultimately, the goal must be to change how planning professionals view PWLD, and to work collaboratively with PLWD to build more accessible, inclusive neighbourhoods.