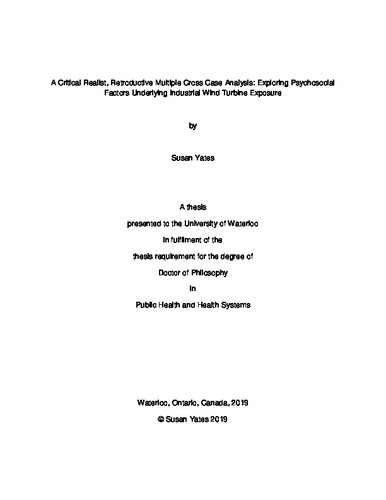 Few people today would deny the negative impact of non-renewable energy sources on the health of our planet. Around the globe, efforts are underway to reduce the world’s reliance on fossil fuel and nuclear energy. The rapid implementation of new renewable energy technologies, like Industrial Wind Turbines (IWTs) in rural environments has raised concerns regarding the potential effects of these technologies on human health. The mechanisms by which IWTs may affect local residents’ physical, emotional, and social health and well-being have yet to be determined. The purpose of this thesis is to intentionally explore psychosocial health factors underlying the IWT phenomenon, critically examine individual and group IWT experiences and perceptions, and triangulate multiple sources of data from which to further the understanding of the IWT health phenomenon. This study utilizes a qualitative multiple cross case study design and retroductive approach to explore, through social ecological and critical realism lenses, the lived experiences of adults from three wind farm communities in south western Ontario, living within five kilometres of one or more IWTs. A systematic scoping review of IWT health literature as well as environmental health literature was completed. IWT and health literature has increased, especially since 2013. A full text analysis of 217 articles was conducted and findings suggest that psychological and sociological (psychosocial) dimensions, including fear-perceptions, personality traits, attitudes, and community conflict, may be associated with reported adverse health effects. However, there continues to be several gaps in IWT research including; longitudinal studies, baseline studies pre-IWT installation, research regarding community response to IWT development (including noise, planning, landscape change), qualitative and field-based research. This thesis will serve to address and contribute to the latter identified gap. Thirty-one interviews were conducted with participants representing three Ontario wind development communities. Interview transcripts underwent a narrative thematic analysis. Interview findings revealed that both IWT supporters and non-supporters have some degree of worry or distress regarding financial implications of IWT installations and believe there is a global need to reduce the reliance on fossil fuels. Majority of IWT non-supporters described IWTs as visually annoying and reported associated health effects, including poorer mental health. A minority of non-supporters indicated that IWT noise was annoying. Very few participants attributed noise annoyance to sleep disturbance. Irrespective of participants’ support or non-support of IWTs, several interesting manifest (public) and latent (private) factors emerged from the interviews. Almost all participants reported being more concerned about the financial aspects of IWT development, government-decision making, and the perceived fairness in IWT siting than feeling concerned about potential health effects of IWT exposure. Additionally, a previous significant life event and a person’s level of attachment to their home, land and community appeared to influence perception, the ability to adapt to environmental change, and extent to which one experienced psychological distress. Triangulated results of thematic analysis from multiple data sources including literature, interviews and health assessment data revealed that changes to rural community and home environment (landscape) may affect person-place bonding and restorative properties of nature and home, while fear-inducing media and opposition messaging may amplify visual and noise annoyance and financial worry that may be associated with poorer self-rated health. Results from multisource data identified psychosocial factors associated with exposure potentially contribute to or be a consequence of actual or perceived environmental change. Further analysis suggests health effects may be explained by a combination of psychological (internal), socially influenced (external), and either amplifying or mediating factors. These factors informed a revision and a design of two conceptual models. The main components of these models consist of; external variables; mediating variables; and outcome variables. Individual characteristics like values and beliefs along with community-related variables suggest the explanatory power of personality traits, life stress and coping skills, and person-place bonding as well as site-related characteristics like social networks and approach to communication and site planning. Based on these themes a revised IWT health model and what is believed to be the first IWT social ecological concept model are presented. This work confirms previous studies that identified a need to expand policy decisions and environmental health assessments to include a holistic and ecological assessment of health impacts. In the context of wind energy and wind farm development, this multiple case study contributes to IWT literature by deepening the understanding of the dynamic interconnection between psychosocial factors and IWT development. The identification of differences between manifest and latent perspectives provides important insights into factors that may be associated with or contributed to reported health concerns. The resulting analysis elucidated that psychological processes and socially influencing factors and complex mechanisms may be indirectly associated to individual perception of wind turbines and self-rated health. Caution must be taken in interpreting the findings of this study. Given the complex mechanisms and diversity of variables of the findings, and models conclusions regarding a cause and effect relationship to IWTs must not be made. This work highlights the need for environmental health assessments to include specific requirements that could address, alleviate, or prevent psychosocial effects from IWTs or industrialization of rural communities.