Hydraulic Road Binder (HRB) and Its Use for Subgrade Stabilization in Ontario, Canada 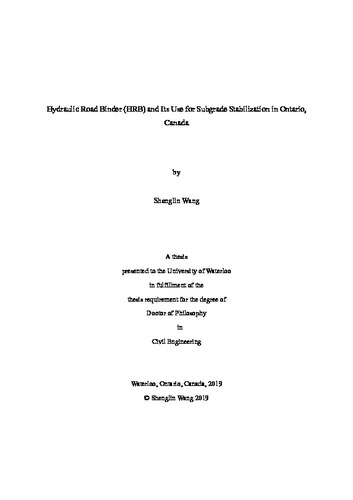 The term “subgrade” refers to the in-situ material composed of natural soil located underneath the pavement structural layers. The quality of natural subgrade is highly influenced by soil type, moisture content, and organic content. Furthermore, the failure of subgrade soils may lead to severe pavement distresses including rutting, potholes, and cracking. In order to enhance the subgrade engineering properties, a variety of stabilization methods have been developed. One of the most popular and cost-effective methods is in-situ subgrade soil stabilization using hydraulic binders. In-field soil modification and stabilization frequently use Portland cement as the chemical additive. Such method significantly enhances the engineering characteristics of soils in terms of plasticity, strength, stiffness, and durability. Despite the advantages, the chemical mixing also brings some disadvantages including rapid setting, drying shrinkage cracking, and higher cost. Recently, Supplementary Cementitious Materials (SCMs) made of by-products and industrial secondary materials (e.g. granulated blast furnace slag, cement kiln dust and fly ash) have been studied extensively to reduce the use of cement. Hydraulic Road Binder (HRB) is a European specified material designed for treatment of road bases, subbases as well as earthworks. HRB contains both cement clinker and a substantial amount of SCMs. Therefore, the use of HRBs has the potential to be more cost-effective and environmentally friendly than Portland cement. However, the research and application of HRB is new in Canada. The study started with an investigation of cement and different formulated HRBs in the form of paste and mix (mortar). Then, selected HRBs were used to evaluate their impacts on the chemical and physical properties of three local subgrade soils. In addition, a field application of weak subgrade stabilization using cement was introduced. Lastly, a study aiming to predict the long-term pavement performance was conducted in order to simulate the impact of stabilized subgrade in pavement design. The research findings are summarized as follows: • HRBs were found to reduce the setting time, reduce the speed of hydration, and the hydration temperature compared to Portland cement. The hydration products in hydrated HRBs and Portland cements were generally the same, but their contents were different. In addition, a reduction of drying shrinkage was observed in HRB mortars especially in those containing substantial SCMs. Regarding the strength, several HRB mortars had equivalent strength as cement mortars after 28 days of curing. Furthermore, a linear correlation was found between the compressive strength and flexible strength. Statistical analysis further revealed that the strength of HRB mix highly correlated to the content of GU, GUL, and GGBFS. • All the three subgrade soils (named Dresden, Blenheim, and Niagara) were fine-grained soils with substantial silt- and clay- sized particles. Ignition test indicated that all the three soils include high content of organic matters. In particular, Niagara soil with high plasticity, high organic material content had lower strength and modulus compared to the other two soils. Using the stabilizers, the soil’s pH values increased to around 12 and above. In addition, significant improvement had been observed in stabilized soils in terms of strength, durability, and resilient modulus. Nevertheless, the clay particles and organic matters inhibited the treatment. Increase of stabilizer content further promoted improvement. In particular, HRB-4LS had the best stabilization effect followed by GU, HRB-4LF, and HRB-3S. On the other hand, HRB-2S and HRB-3C treated soils had lower strength and modulus values. Finally, statistical analysis indicated that soil’s UCS values correlated with binder strength, binder content, curing, and untreated soil’s strength. • Field testing indicated that the workability and conditions of subgrade were significantly improved by hydraulic binder. Moreover, the modulus of subgrade surface further increased with curing time. After one year of service, the conditions of roads were good in most test sections. Furthermore, long-term pavement performance prediction (LTPP) revealed the feasibility of using cement and HRB stabilized subgrade to reduce the thickness of subbase layer. In terms of international roughness index and subgrade deformation, pavements constructed with HRB stabilized subgrade materials had equivalent performance as cement treated one over their design life. To summarize, this study focused on evaluating the used of Hydraulic Road Binders formulated in Canada for pavement subgrade stabilization. The research showed that HRB mortars have similar or slightly better strength compared to Portland cement alone with sufficient curing time. Moreover, The HRB improved subgrade soils were shown to perform adequately using several HRB types. In addition, the use of HRB-stabilized subgrade in pavement structure would improve the LTPP of pavement. Therefore, the use of HRB in the subgrade stabilization could be a promising solution in pavement construction due to its equivalent performance and with the potential environmental and cost advantages.