Typologies of Nitrogen Surplus Across Continental US: Shifting Hotspots and Dominant Controls 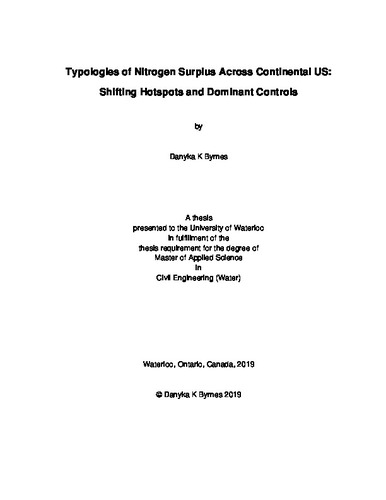 Flows of reactive nitrogen (N) have significantly increased over the last century, corresponding to increases in the global population. The pressures on the N cycle include human waste, fossil fuel combustion as well as increasing food production (i.e., increasing fertilizer consumption, biological N fixation, and livestock manure production). The result is humans causing a 10-fold increase in the flow of reactive N globally. The influx of anthropogenic N into aquatic environments degrades water quality, alters fresh and saline ecosystem productivity, and poses an increasing threat to drinking water sources. In the U.S., decades of persistent hypoxic zones, created by elevated concentrations of nitrate from the landscape, have altered ecosystem trophic structure and productivity. Additionally, increasing N contamination of groundwater aquifers places over 20% of the U.S. population at increased risk of diseases and cancers. Despite billions of dollars of investment in watershed conservation measures, we have not seen proportional improvements in water quality. It has been argued that delayed improvements in water quality can be attributed to legacy stores of N, which has accumulated in the landscape over many decades. There is considerable uncertainty associated with the fate of N in the landscape; however, studies quantified increasing stores of N in the subsurface, suggesting increasing stores of N in groundwater aquifers, in soil organic nitrogen pools, and the unsaturated zone. Nevertheless, the spatial distribution of legacy N across the conterminous U.S. is poorly quantified. Here, we have synthesized population, agricultural, and atmospheric deposition data to develop a comprehensive, 88-year (1930 to 2017) dataset of county-scale N surplus trajectories for the U.S. N surplus, defined as the difference between N inputs and usable N outputs (crop harvest), provides insight into the trends and spatial distribution of excess N in the landscape and an upper bound on the magnitude of legacy N accumulation. Our results show that the spatial pattern of N surplus has changed drastically over the 88-year study period. In the 1930s, the N inputs were more or less uniformly distributed across the U.S., resulting in a few hotspots of N surplus. The following decades had sharp increases in N surplus, driven by the exponential use of fertilizer and combustion of fossil fuels. Contemporary N surplus distribution resembles a mosaic of varying degrees of excess, concentrated in the heavily cultivated areas. To understand dominant modes of behavior, we used a machine learning algorithm to characterize N surplus trajectories as a function of both surplus magnitudes and the dominant N inputs. We find ten primary clusters, three in crop dominated landscapes, four in livestock dominated landscapes, two in urban dominated landscapes, and one in areas minimally impacted by humans. Using the typologies generated can facilitate nutrient management decisions. For example, watersheds containing urban clusters would benefit from wastewater treatment plant upgrades. In contrast, those dominated by livestock clusters would have more success in managing nutrients by implementing manure management programs. The estimates of cumulative agricultural N surplus in the landscape highlights agronomic regions that are at risk of large stores of legacy N, possibly leading to groundwater and surface water contamination. In these agronomic regions, the average cumulative N surplus exceeds 1200 kg-N/ha by 2017. Despite having minimal agricultural activity in urban areas, urban fertilizer use has led to an average cumulative N surplus of over 900 kg-N/ha. While our estimates are an upper bound to legacy stores, significant uncertainty remains regarding the magnitude of the estimate of N accumulation. However, our results suggest that legacy N is at varying degrees, impacting most counties in the U.S. The significant investment and corresponding lack of returns can lead to disillusionment in farmers, watershed managers, and the general public. Developing such N surplus typologies helps improve understanding of long-term N dynamics. Beyond refining the supporting science, appropriately communicating uncertainties and limitations of water quality improvements to the stakeholders, authorities, and policymakers are essential to continuing efforts to improve national water quality.