Moral Panics and the Governance of South Asian Gang Involvement: The Construction of a Local ‘Cultural’ Problem 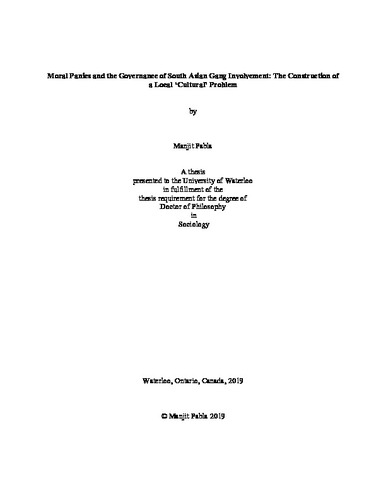 In the last three decades, nearly two hundred South Asian men have died in gang violence in Lower Mainland British Columbia. These deaths, coupled with the fear that young men in the community are susceptible to joining gangs, have both triggered and constructed a regional panic over South Asian gangs. This thesis examines the problematization and governance of this phenomenon through 34 in-depth, qualitative interviews with law enforcement officials, educators, and representatives of community organizations who are on the frontlines of gang programing in lower mainland BC. Drawing on the insights of governance scholarship as well as critical studies on moral panics, race, and masculinities, this thesis illuminates the explanations, folk heroes, and villains that play out in official responses to South Asian gang violence. The analysis reveals the multiple ways in which respondents draw on mainstream ideas on culture to explain gang involvement of South Asian boys and men. Assuming this group possesses a distinct value system at odds with mainstream society, interviewees attributed the appeal of gang affiliation to the desire for a ‘gold-collar lifestyle.’ The effect is the pathologization of South Asian ‘culture’ as inherently criminogenic and the neglect of analytical distinctions between ‘culture’ and structural factors. The thesis further examines how the community is differentially enlisted to manage the South Asian gang involvement. Focusing on a controversial strategy known as the BRE program as well as the various programs delivered by ethno-specific South Asian community organizations, the analysis reveals the ways in which community is mobilized for the contradictory objectives of social exclusion and inclusion. The dissertation concludes with an examination of the cultural mythology surrounding the notorious South Asian gangster, Bindy Johal. Drawing attention to his status as both a folk devil and hero, the discussion reveals two duelling narratives framing his legacy. On the one hand Johal is perceived as a contemporary folk devil who continues to draw South Asian youth to gangs today. On the other, he is perceived as an anti-hero or sympathetic figure who overcame racism and the diminishing of South Asian masculinity. The overall effect of these contradictory narratives is the overshadowing of racism, class oppression and related structural factors that underlie why gang involvement may appeal to some disenfranchised boys and men in the South Asian community. Overall, this study makes an important contribution to the growing literature on the role of community in the governance of crime as well as on the topic of South Asian gang involvement, which has received little empirical attention.