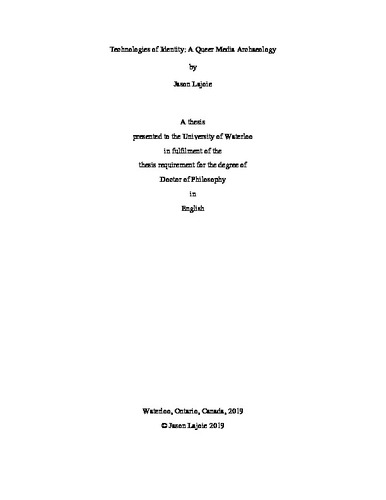 This dissertation explores how queer people use media technology to make and construe their identities through a series of cases extending from the Victorian era to the present day. Each case is driven by three interlocking questions: How have people used technology to make queer identities? How can practices of re-using and repurposing media technology express queer identities? How can the identity of a given technology impact and influence these expressions? Drawing on key texts from gender studies, the history of sexuality and the philosophy of technology, this dissertation first offers a theory of how queer interactions with media technologies can make identities; which it applies to developments of queer identities from the 1890s up to 2018. My media archaeological framework explores the development of terms like gay, lesbian, and gaymer through media systems and reflects on how these terms have influenced the social, cultural and technological networks in which they developed. Using a methodology that engages with cultural objects by situating them within the specific social and technological contexts of their emergence, I explore the obscenity trials of two notable queer authors, Oscar Wilde and Radclyffe Hall, as well as the rise of gay liberation discourses between the 1940s and 1970s. I pay particular attention to the media involved in each instance to show the importance of the technological context to the development of discourses about being queer and expressing queer identities. Other chapters examine the queer potentialities of Alan Turing’s Imitation Game and the pioneering queer magazine Vice-Versa, both created between 1947-1950, to show how media can be queered and produce queer meanings. With this potential in mind, I analyze the discourse of the r/Gaymers subreddit from 2017-2018 by situating it within the technocultural context of its social media platform. To explore this theory in a more concrete way, the dissertation concludes by putting research into practice with the creation of a critical speculative media object that emphasizes the influence of the gendered discourse on the possibilities for creating media. Taken together, these cases suggest how non-normative identities can be constructed, shared and then understood by others to form links, to develop communities, and eventually to lead lives beyond heteronormative demands. By excavating these media scenes and placing them into correspondence with one another, this dissertation focuses on the role of media technologies in the construction of identity. It shows the consequential role of media technologies in making and sharing identities, and considers how queer identities are informed by the tools used to express them and how the need for queer expression can influence the development of media technologies in response.