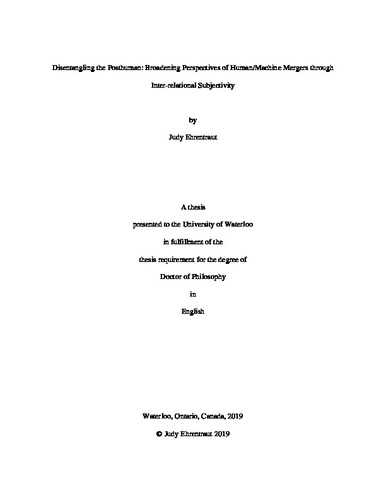 In the conclusion of How We Became Posthuman, N. Katharine Hayles states that the terror of posthumanism comes from its dual connotation of superseding the human and coming after it, implying that the days of being human are coming to an end. Certain branches of posthuman discourse suggest that the intersection of humans and advanced technologies has already resulted in the dissolution of essentialist understandings of the human to make way for the posthuman. While some theorists interpret this emergence as marking the human’s fall and subsequent rise as a transcendent being imbued with technological adornments, others rightly see it as the disbanding of the human of Enlightenment philosophy. Yet as this dissertation argues, even iterations of posthuman thought that attempt to reject anthropological and sociocultural essentialisms inadvertently re-affirm humanist ideologies. This is mainly due to normative and dogmatic ideas about technology’s place in the human world that frame it as dehumanizing and oppositional on the one hand, or transcendent and empowering on the other. In both cases, the human/technology relationship is pre-coded by the assumption that technology gesticulates a dislodging of “natural” human purity, which encourages the fear that human agency predicated on self-possession is at risk. Engaging with the works of Hayles, Rosi Braidotti and Karen Barad, I propose that agency is not something one possesses, but an outcome of entanglements where identity is formed when the subject recognizes difference over assimilation. My contention is that humans typically approach potential connections with technologies as opportunities to extend the individual unitary self, rather than exploring the self as open, incomplete and always emerging. When technology is perpetually seen as an intrusive addition to the human, a false dichotomy develops where authentic self-representation is endangered by technological mediation. As well, the rhetoric that technology possesses the power to make us “more human” (Case 2010; Hauskellar 2013; Taylor 2011; Casey 2013) frames it as a vehicle with which the normative able-bodied human elevates its control over the world. Thus, in response to the increasing demonization of communication technologies, my critique of digital abstinence initiatives reveals the ableist, racist and classist underpinnings that discount the varied ways all humans entangle with artifacts to participate in subject-making. Rather than theorizing how posthumanism represents the promises of technological extension, I evaluate the underlying exclusions that assign certain humans as lacking and needing improvement. Building on Braidotti’s ethics of becoming and the movement from a unitary to nomadic subject, my conception of “inclusive posthumanism” disengages from the idea that the human’s purpose is to progress. By rejecting individualism and self-interest to promote a larger inter-relationality with other human and non-human artifacts, I see the inclusive posthuman as an opportunity to theorize subjectivity as a decentralization of the human’s role within a larger system. This both recognizes the human’s importance without implying its obliteration, and offers constitutions of a collective self that is uncovered through chance encounters.