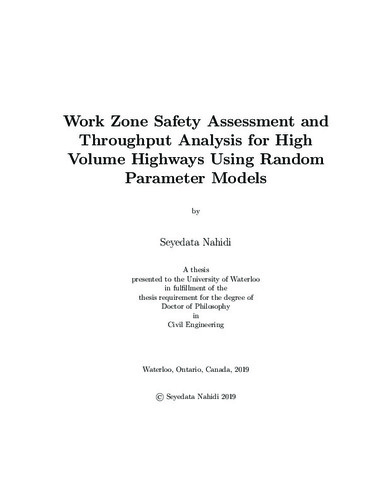 Highways and freeways could be considered the most important transportation infrastructure in North America; these vital routes are necessary for the efficient haulage of huge amounts of goods and services. Several factors such as the high volume of heavy truck traffic as well as harsh winters in this region could result in a faster deterioration rate of the transportation infrastructures, specifically pavements. Transportation agencies, under the supervision of municipalities, are responsible to maintain, preserve, and reconstruct these segments. Applying the proper care results in a significant reduction in the number of observed conflicts and collisions on high-volume highways. Washington State Department of Transportation defines a work zone as, "...an area of a roadway with construction, maintenance, or utility work activities. A work zone is typically marked by signs, channelizing devices, barriers, pavement markings, and/or work vehicles." Based on previously conducted studies, work zones can significantly interrupt the regular traffic flow on highways. These interruptions can have adverse effects on the safety of the roads and increase the likelihood of undesirable conflicts and collisions. To avoid any unexpected work zone related safety concerns, Departments of Transportation in the US, as well as Ministries of Transportation in Canada, encourage agencies to propose detailed plans to minimize the queuing period and injury severity of work zone collisions; the most common strategy is to set up work zones at nighttime. Independent reports by the Ministry of Transportation Ontario (MTO) also identified that predicting the throughput, and the queuing length, as well as the queuing period, can significantly improve the planning stage, reduce the user delay costs, and increase work zone safety for workers and motorists. Statistical analyses and modelling are methods used to acquire information from historical data sets and gain a more realistic insight into future events with an acceptable confidence level. This research involves the statistical evaluation of work zones' safety and performance, along with comprehensive analyses of work zones' throughput in North America. To evaluate the different strategies, Multiple Linear Regression (MLR) and Negative Binomial Regression (NBR) models were developed to identify the critical historical factors which affect the traffic throughput of work zones. For safety assessment of work zones, innovative random parameter approaches were adapted in combination with ordered probability models to produce robust and realistic results. Furthermore, the practicality and applicability of random parameter models were discussed to clarify the advantages of using these models. Random Parameter Negative Binomial (RPNB) and Random Parameter Ordered Logit (RPOL) models developed in this study were found to be the most accurate models for throughput and safety analysis, respectively. Also, the implementation of k-fold cross validation proved that the model predictions correlated well with historical data. Finally, a new approach for Random Parameter prediction was proposed which considers the similarity level between a potential event and historical data. Based on these evaluations, the overall feasibility of each strategy was examined. The results denoted several practical recommendations to decrease traffic congestion and create safer work zones. The random parameter negative binomial model for throughput analysis showed that to avoid queuing in work zones where there are two or more obstructed lanes, multiple short (less than 3 km) work zones are more efficient than longer ones; this factor increases the frequency of passing vehicles by 177 per hour per lane. Besides, weekend nights are found to be the most appropriate time to set up work zones. It is observed that weekend nighttime work zone set-ups increase the number of passing vehicles by 493 vehicles per hour per lane compared to other scenarios. In general, nighttime closures, occurring on any day during the week, are found to have a higher discharge rate in comparison with daytime closures. On highways with more than 20% truck traffic, it is expected to have 102 fewer vehicles passing through work zones due to the induced congestion. Similarly, random parameter ordered probability models identified several factors which are shown to have a statistically significant impact on work zone collisions' injury severity level. As an example, aggressive driving behaviours, e.g. failing to keep in the proper lane, running other drivers off the road, and tailgating, increase the major injury and fatal collisions' likelihood by 78%. The installation of traffic control devices, specifically warning signs, reduce the probability of fatalities by 14%. Moreover, alcohol and drug consumption increase the probability of fatal and major injury collisions by 36% based on random parameter ordered Logit model, so by enforcing strict laws many lives can be saved. After analysis, common practices and the author's recommendations for each significant factor in the selected models are discussed. Primarily, the prohibition of truck traffic, designing efficient detours, and installation of extra and more innovative traffic control devices prior to the work zones are recommended. It was also concluded that the most efficient way to have a safe and comfortable environment in work zones on high-volume highways is to encourage government, engineers, and motorists to collaborate. Collaboration could take the form of the public awareness campaigns, setting and enforcing effective laws and regulations, and assuring the proper implementation of existing guidelines. Last but not least, the accurate prediction of work zone throughput frequency at queuing time provided an appropriate context for better work zone planning to reduce the possible user delay cost. The outcome of this research was the development of a novel planning and decision-making tool (`smart form') to help engineers and contractors to evaluate the work zone safety of high-volume highways in North America.