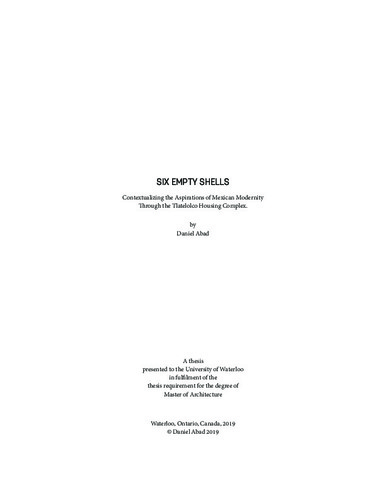 During the 1950’s, the Mexican federal government pursued an ambitious plan to modernize the country. With the growing apparatus of government and facing a demographic explosion, the capital, Mexico City, faced a critical housing shortage in which the one-party regime saw an opportunity to embed its institutional ambitions. Looking north, towards the informal and marginalized boroughs of Tlatelolco, Peralvillo and Teptio, the first phase in the city’s northern renewal plan was the Nonoalco-Tlatelolco Housing Complex completed in 1963. It epitomized the emerging modern Mexico, extending for 95 hectares, containing 102 residential buildings with 12,000 dwellings, all the while boasting monumental buildings, squares, historical sites, and government offices, proposing a radically new urban lifestyle. However, with the 1964 change in leadership, the later phases of the renewal plan never came to fruition. The new administration forsook social housing projects, causing serious financial issues for the upkeep and maintenance of Tlatelolco. This was further aggravated by tragic social and environmental events, leaving Tlatelolco an estranged monumental housing experiment in the informal northern city fabric, a reminder of failed public policies and promises. Despite this, the residents of Tlatelolco have found a way to appropriate modernism, and through a tightknit community, have saved the housing project from falling into complete disrepair. As Mexico City once again faces an urban housing crisis, it is vital to re-examine and reconcile with the modernist aspirations embodied in this housing project. Positioning Tlatelolco within the discourse of its contemporary theorists, Josep Lluís Sert argues that “monuments are only possible in periods in which a unifying consciousness and unifying culture exist. […] Monuments of recent date (1943) have with rare exceptions become, empty shells. They in no way represent the spirit or the collective feeling of the modern times.” Given that the Mexican Miracle did not create a lasting unifying consciousness, Tlatelolco was left a virtual field of empty shells. The methodology proposed in this thesis targets interventions at six monuments—the empty shells—where the aspirations pursued by the modernist experiment are contextualized through site specific architectural interventions. Ultimately, rather than representing a ‘spirit or collective feeling of modern times,’ the shells become the containers of the collective memory of the site and the people who dwell in it.