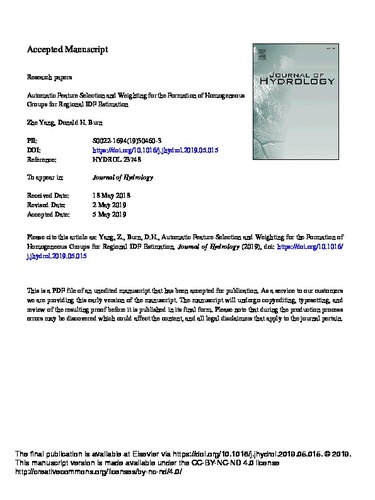 The intensity-duration frequency (IDF) curve has been used as an effective tool to quantify the risk associated with the impact of extreme rainfall on civil infrastructure. However, recent changes in the rainfall climatology caused by climate change and urbanization have made estimates in the stationary environment provided by the traditional regional IDF approach increasingly inaccurate. This inaccuracy is mainly caused by the lack of consideration for the temporal and spatial differences in the selection of similarity indicators (attributes that are used to measure similarity of extreme rainfall patterns among different stations), resulting in ineffective formation of homogeneous groups (group of stations that share similar extreme rainfall patterns) at various regions. To consider the temporal differences of similarity indicators, including meteorological factors, topographic features and urban impact indicators, a three-layer design is proposed based on the three stages in extreme rainfall formation: cloud formation, rainfall generation and change of rainfall intensity over an urban surface. During the process, the impacts from climate change and urbanization on extreme rainfall patterns are considered through the inclusion of potential features that relate to the rainfall mechanism at each layer. The spatial differences of similarity indicators for Homogeneous Group Formation (HGF) at various regions is resolved by using an automatic feature selection and weighting algorithm, specifically the hybrid searching algorithm of Tabu Search, Lagrange Multiplier and Fuzzy C-means clustering, to select the optimal combination of features for HGF based on the uncertainty in the regional estimates of the rainfall quantiles for a specific site. The proposed methodology fills the gap of including the urbanization impacts on the extreme rainfall patterns during HGF process and challenges the traditional assumption that the same set of features can be equally effective in generating the optimal homogeneous group in regions with different geographic and meteorological characteristics.