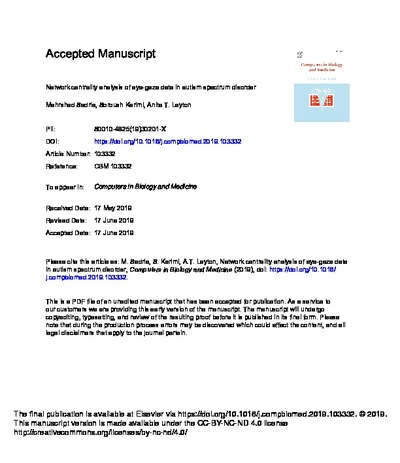 Individuals suffering from autism spectrum disorder (ASD) exhibit impaired social communication, the manifestations of which include abnormal eye contact and gaze. In this study, we first seek to characterize the spatial and temporal attributes of this atypical eye gaze. To achieve that goal, we analyze and compare eye-tracking data of ASD and typical development (TD) children. A fixation time analysis indicates that ASD children exhibit a distinct gaze pattern when looking at faces, spending significantly more time at the mouth and less at the eyes, compared with TD children. Another goal of this study is to identify an analytic approach that can better reveal differences between the face scanning patterns of ASD and TD children. Face scanning involves transitioning from one area of interest (AOI) to another and is not taken into account by the traditional fixation time analysis. Instead, we apply four network analysis approaches that measure the “importance” of a given AOI: degree centrality, betweenness centrality, closeness centrality, and eigenvector centrality. Degree centrality and eignevector centrality yield statistically significant difference in the mouth and right eye, respectively, between the ASD and TD groups, whereas betweenness centrality reveals statistically significant between-group differences in four AOIs. Closeness centrality yields statistically meaningful differences in three AOIs, but those differences are negligible. Thus, our results suggest that betweenness centrality is the most effective network analysis approach in distinguishing the eye gaze patterns between ASD and TD children.