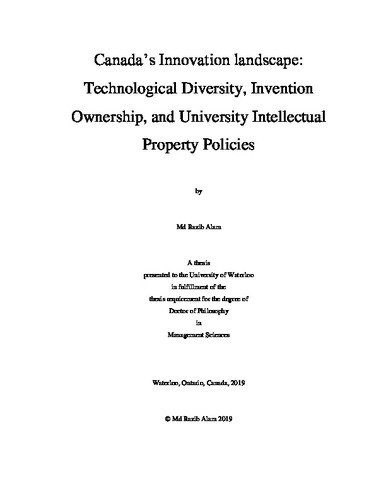 This thesis examines Canada’s innovation landscape in three essays: the first identifies the patterns of innovation and technological diversification of Canada during the last three decades, the second identifies the ownership of Canadian inventions, and the third identifies the determinants of university funding in Canada. The first essay examines the changing landscape of Canada’s technological development and diversification based on the patent data filed in Canada and the United States by Canadian inventors for the period between 1980 and 2014. This is one of the first studies that compare the destinations of patents using both domestic and foreign patent databases. Using multiple databases can help explain the patenting behavior of domestic inventors and the technological landscape of a country in more detail. This study investigates the causes of any sharp increase or decrease in patenting trends in Canada and the United States. Moreover, it measures the technological diversification of various types of assignees by patent destination countries. Based on the patent data of Canadian inventors, the result of the study shows that although the number of patents increases, the diversity of technologies shrinks over time. Finally, the study focuses on innovation and technological diversification in census metropolitan areas of Canada. Canada’s innovative activities concentrate in a few metropolitan areas, and diversity of technology varies across Canada. Few recent studies (The Council of Canadian Academies, 2018; Gallini & Hollis, 2019) expressed concern that the foreign entities and foreign subsidiaries in Canada increasingly owned the Canadian invented patents. Motivated by the concern, the second essay investigates the ownership pattern of Canadian invented patents in a broader set of technology categories. Utilizing the USPTO patent data of Canadian inventors between 1976-2014, this study finds that the share of Canadian and foreign-owned patents varies by technology class, geographic origin, and types of assignees over time. Most of the shares of modern technologies, such as information technology is going to the hands of foreigners. Canadian invented patent with higher quality is also going to the hands of foreign assignees. This study also shows that the number of unassigned patents is declining over time due to the increase in Canadian patent quality in general. In 2002, the Government of Canada released its innovation policy report, titled “Achieving Excellence,” that emphasized on the commercialization potential of federally funded academic research (Government of Canada, 2002). To meet the government mandate, Canadian universities started to encourage their researchers to engage in projects with more commercialization potential (Langford et al., 2006; Bubela & Caulfield, 2010). Motivated by this observation, the third essay analyzes whether the number of patents can predict the amount of funding to universities. However, the technology commercialization effort of a university depends on which Intellectual Property (IP) ownership policy it follows. Canada does not have any unique Intellectual Ownership (IP) policy for its universities. Using the panel data of 54 Canadian universities between 2000 and 2012, this study addresses the following two questions: (i) does university intellectual property (IP) policy affect the number of patents generated by a university? And, (ii) does the number of patents affect the amount and sources of federal funding to universities? This study shows that inventor-owned IP ownership policy is the best for patent generation in Canadian universities. The results show that patents positively predict the amount and sources of funding. This study also finds that the amount of funding from the private sector is strongly affected by the number of patents.