At the Corner of Space and Time 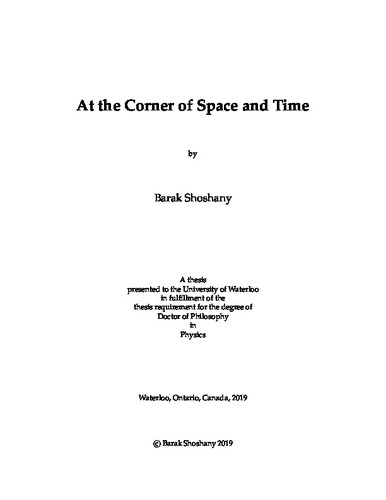 We perform a rigorous piecewise-flat discretization of classical general relativity in the first-order formulation, in both 2+1 and 3+1 dimensions, carefully keeping track of curvature and torsion via holonomies. We show that the resulting phase space is precisely that of spin networks, the quantum states of discrete spacetime in loop quantum gravity, with additional degrees of freedom called edge modes, which control the gluing between cells. This work establishes, for the first time, a rigorous proof of the equivalence between spin networks and piecewise-flat geometries with curvature and torsion degrees of freedom. In addition, it demonstrates that careful consideration of edge modes is crucial both for the purpose of this proof and for future work in the field of loop quantum gravity. It also shows that spin networks have a dual description related to teleparallel gravity, where gravity is encoded in torsion instead of curvature degrees of freedom. Finally, it sets the stage for collaboration between the loop quantum gravity community and theoretical physicists working on edge modes from other perspectives, such as quantum electrodynamics, non-abelian gauge theories, and classical gravity.