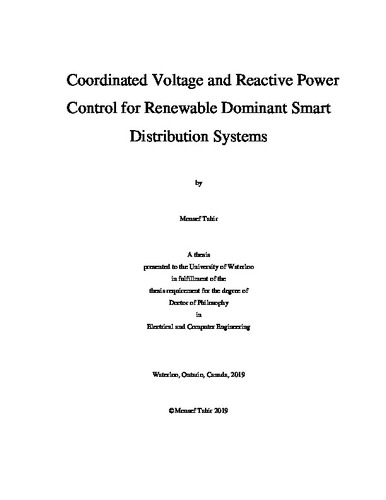 Driven by their economic and environmental advantages, smart grids promote the deployment of active components, including renewable energy sources (RESs), energy storage systems (ESSs), and electric vehicles (EVs), for sustainability and environmental benefits. As a result of smart grid technologies and the amount of data collected by smart meters, better operation and control schemes can be developed to allow for cleaner energy with high efficiency, and without breaching network operating constraints. Power distribution networks may face some operational and control challenges as the integration of intermittent energy sources (wind and PV power systems) increases. Some of these challenges include voltage rise and fluctuation, reverse power flow, and the malfunction of conventional Volt/Var control devices. Depending on their location, RESs may introduce two issues related to the Volt/Var control problem, the first of which is that the severity of loading variations will be greater than the case without RESs. The second occurs when the RES is connected between the load center and any regulating devices. The power in-feed from the intermittent RESs may not only mislead the regulator’s control circuit, resulting in unfavorable voltage, but may also enforce the regulator taps to operate randomly following bus voltage variations. This thesis investigates and presents a methodology for the Volt/Var control problem in Smart Distribution Grids (SDGs) under the high penetration and fluctuation of RESs. The research involves the application of predictive control actions to optimally set Volt/Var control devices before the predicted voltage violation takes place. The main objective of this controller is to manage and control the operation of Volt/Var devices in an optimal way that improves the voltage profile along the feeders, reduces real power losses and minimizes the number of Volt/Var device taps and/or switching movements under all loading conditions and for high penetration RESs. This thesis first presents a very Short-Term Stacking Ensemble (STSE) forecasting model for solar PV and wind power outputs that is developed to predict the generated power for intervals of 15 minutes. The proposed model combines heterogeneous machine learning algorithms composed of three well-established models: Support Vector Regression (SVR); Radial Basis Function Neural Network (RBFNN); and Random Forest (RF) heuristically via SVR. The STSE model aims to minimize the prediction error associated with renewable resources when used in the real-time operation of power distribution networks. Secondly, a day-ahead Predictive Volt/Var Control (PVVC) model is developed to find the optimal coordination between Volt/Var control devices under the high penetration and power variations of RESs. The objective of the PVVC model is defined as simultaneous minimization of voltage deviation at each bus, power losses, operating cycle of regulation equipment, and RES curtailment. The benefit of using smart inverter interface RESs with the capability of injective/absorbing reactive power is examined and applied as ancillary services for voltage support. Thirdly, a Sequential Predictive Control (SPC) Strategy for smart grids is developed. The model uses the past and currently available data to forecast demand and RES outputs for intervals of 15 minutes, with real-time updating mechanisms. It then schedules the settings and operations of Volt/Var control devices by solving the Volt/Var control problem in a rolling horizon optimization framework. Because the optimization must be solved in a short interval with a global solution, a solution methodology for linearizing the nonlinear optimization problem is adapted. The original control problem, which is a Mixed-Integer Nonlinear Programming (MINLP) optimization problem, is transformed into a Mixed Integer Second Order Conic Programming (MISOCP) problem that guarantees a global solution through convexity and remarkably reduces the computational burden. Case studies carried out to compare the proposed model against state-of-the-art models provides evidence for the proposed model’s effectiveness. Results indicate that the SPC is capable of accurately solving the control problem within small time slots. The proposed models aim to efficiently operate SDGs at a high penetration level of RES for a day-ahead, as well as in real-time, depending on the preference of network operators. The primary purpose is to minimize operating costs while increasing the efficiency and lifespan of Volt/Var control devices.