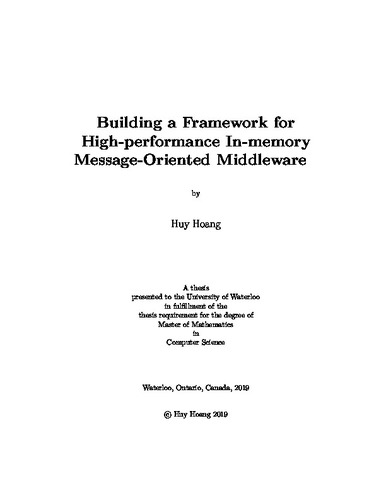 Message-Oriented Middleware (MOM) is a popular class of software used in many distributed applications, ranging from business systems and social networks to gaming and streaming media services. As workloads continue to grow both in terms of the number of users and the amount of content, modern MOM systems face increasing demands in terms of performance and scalability. Recent advances in networking such as Remote Direct Memory Access (RDMA) offer a more efficient data transfer mechanism compared to traditional kernel-level socket networking used by existing widely-used MOM systems. Unfortunately, RDMA’s complex interface has made it difficult for MOM systems to utilize its capabilities. In this thesis, we introduce a framework called RocketBufs, which provides abstractions and interfaces for constructing high-performance MOM systems. Applications implemented using RocketBufs produce and consume data using regions of memory called buffers while the framework is responsible for transmitting, receiving and synchronizing buffer access. RocketBufs’ buffer abstraction is designed to work efficiently with different transport protocols, allowing messages to be distributed using RDMA or TCP using the same APIs (i.e., by simply changing a configuration file). We demonstrate the utility and evaluate the performance of RocketBufs by using it to implement a publish/subscribe system called RBMQ. We compare it against two widely-used, industry-grade MOM systems, namely RabbitMQ and Redis. Our evaluations show that when using TCP, RBMQ achieves up to 1.9 times higher messaging throughput than RabbitMQ, a message queuing system with an equivalent flow control scheme. When RDMA is used, RBMQ shows significant gains in messaging throughput (up to 3.7 times higher than RabbitMQ and up to 1.7 times higher than Redis), as well as reductions in median delivery latency (up to 81% lower than RabbitMQ and 47% lower than Redis). In addition, on RBMQ subscriber hosts configured to use RDMA, data transfers occur with negligible CPU overhead regardless of the amount of data being transferred. This allows CPU resources to be used for other purposes like processing data. To further demonstrate the flexibility of RocketBufs, we use it to build a live streaming video application by integrating RocketBufs into a web server to receive disseminated video data. When compared with the same application built with Redis, the RocketBufs-based dissemination host achieves live streaming throughput up to 73% higher while disseminating data, and the RocketBufs-based web server shows a reduction of up to 95% in CPU utilization, allowing for up to 55% more concurrent viewers to be serviced.