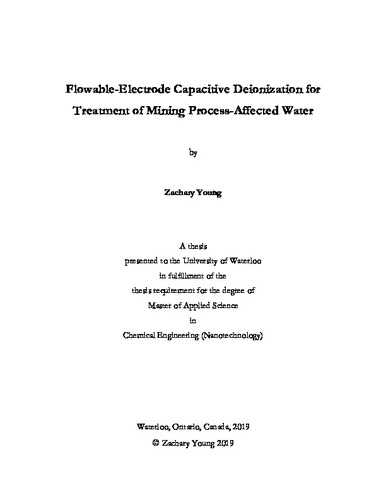 Water is a critical resource in the mining and resources sector. It enables the extraction and materials processing operations that underpin this primary industry, and therefore everyday life. Water’s value in mining means substantial amounts of water are used over the lifetime of a mine, from initial exploration, to mine operations, to long-term closure. The generation of process-affected water in mining is a key part of the environmental impact of each mining site. Canada’s the energy industry is built upon surface mining of bitumen containing oil sands. The water-based extraction of oil from the strip mined sands has led to the accumulation of over 1 billion cubic metres of water stored in tailings ponds. This process-affected water has increased salinity through successive reuses in the extraction process and exposure to minerals in the sand. The dissolve solids in this impacted water affects the ability to safely return the water and land to its natural state, as well as causing corrosion and reduced bitumen extraction efficiency in active operations. Managing these water stocks and reducing dissolve solids accumulated within it is a key operational and remediation challenge for oil sands operators. Deionization technologies such as thermal and membrane processes are most commonly applied in drinking water production applications. However, for complex water streams with a variety of contaminants and relatively low levels of dissolved solids, conventional processes are typically too energy intensive and operationally demanding to be suitable for use in oil sands mining applications. Emerging deionization technologies, such as capacitive deionization (CDI), present an opportunity to reduce the energy demand and increase treatment efficacy for these applications. This thesis studies a novel flowable-electrode capacitive deionization (FCDI) process towards development of a prototype treatment cell, characterization of the prototype performance, and analysis of the application of FCDI to treat dissolved solids in oil sands process-affected water (OSPW). Iterative design of the prototype is shown to generate comparable performance to prior FCDI systems and new analysis is presented for FCDI’s treatment of varied dissolved ions. The studies show FCDI’s efficacy for treatment of all dissolved solids in complex mixtures. Towards its application in OSPW treatment, the FCDI system is tested on representative field samples and demonstrates treatment to below typical water intake quality and analyze treatment on a speciated basis. The treatment study successfully identifies FCDI as a method capable of treating OSPW without substantial pre-processing and at an energy cost below conventional methods. The study concludes that FCDI is well suited for OSPW treatment compared to conventional methods. The thesis demonstrates a new FCDI prototype, treatment of a variety of dissolved ions, variation in key operational parameters, and application of the technology towards treatment of a mining-impacted water. The current work conclude that enhancement and development of the FCDI system should continue towards detailed development of flowable electrode media, characterization of new operational modes, long term treatment study with OSPW, and subsequent scale up of the prototype to a next generation system.