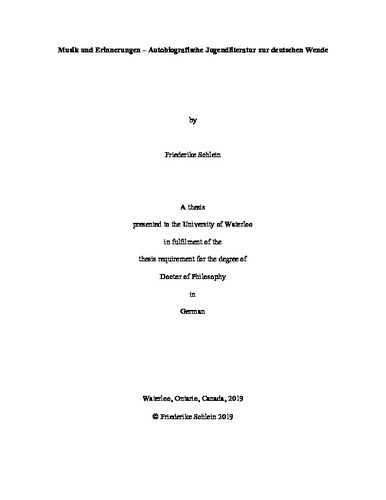 This dissertation focuses on musical memories in three autobiographical texts: Mein erstes T-Shirt (2001) by Jakob Hein; Tonspur: Wie ich die Welt von gestern verließ (2014) by Olaf Hintze and Susanne Krones; and Ostkreuz: Erwachsenwerden in der Wendezeit (2014) by Christian Mackrodt. The analysis examines the central question of how constructed memories of music in the GDR and the particular situation of East German adolescents growing up in the early 1990s function as cultural memory within the acoustic dimension of the Wende discourse, and to what extent the constructed memories contribute to a differentiated picture of young East Ger- man adolescents in the Wende period. The constructed musical memories provide extensive in- sights into the individual experiences and feelings of the three protagonists Hein, Mackrodt and Hintze. According to Ute Dettmar and Mareile Oetken, literature for young people on the German Wende hardly attracts any attention in the ongoing Wende discourse, although it is precisely young people born after the fall of the Wall who are dependent upon literature covering life in the GDR, at the time of the Wende, and during the post-Wende period, since they themselves have no memories of their own. Jan and Aleida Assmann's scholarly work on cultural memory forms the theoretical framework of the dissertation. The analysis employs Carsten Gansel's methodology on cultural memory in German young adult literature. Gansel shows how the narrative structure of youth literature stages and captures cultural memory as memories. The investigation of the narrative structures in Mein erstes T-Shirt, Ostkreuz und Tonspur makes clear that the memories of popular music from the USA, Great Britain and parts of the Federal Republic of Germany found in the three texts stage a cultural memory of the Wende that contributes to the German Wende discourse because they illustrate the effects of the restrictions of the GDR regime on the lives of East German youths and young people; since censorship restricted the avail- ability of pop and rock music from the West, East German youths only had access to this music through illegal means. The constructed musical memories of pop, rock, techno, punk and other music show that music from the West was part of the process of growing up, accompanying the protagonists Hein, Mackrodt and Hintze in their adolescence and becoming an expression of their personality. The musical traces of memory in the autobiographical texts of Hein, Mackrodt, Hintze and Krones can be of significance for the ongoing discourse surrounding the Wende, as they provide points of contact and opportunities for young people from succeeding generations to identify with the Wende, post-Wende and the GDR. Music is a component of the process of growing up, giving expression to one's own personality, and in Mein erstes T-Shirt, Ostkreuz and Tonspur represents a common ground between the three young protagonists Hein, Mackrodt and Hintze and today's young people.