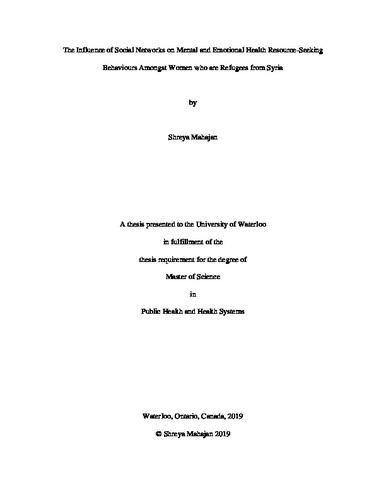 Background and Objectives: While the arrival of migrants into Canada from foreign countries is not a new phenomenon, recent years have seen a larger than usual influx of individuals come into the nation. Between 2015 and 2017, Canada saw a surge of Syrian people who are refugees coming onto its soil; over 24,000 of which were women. The increasing number of individuals who are refugees directly impacts health equity for Ontario’s population and it has been reported that this group is vulnerable to declining health. Migrant women, including those classified as refugees are two to three times more likely than native Canadians to suffer from some form of depression. Other mental health challenges reported by refugees include loneliness, diminished social networks, isolation, and stress. These mental health challenges can negatively impact emotional stability as well. The focus in the present research is the role of social networks, a dimension of and opportunity afforded by social capital, in shaping the mental and emotional health of Syrian women who are refugees – specifically, resource-seeking behaviours in the treatment of mental and/or emotional health problems that they employ in improving their own mental and emotional health. Methods: This study employs a qualitative research design to explore the stories and experiences of this relatively newly studied population. I sampled twelve participants who were adult women from Syria who were living in Canada as refugees at the time of data collection. Telephone interviews were conducted using a semi-structured approach. Eight of the twelve interviews had an Arabic interpreter present, who was able to translate English into Arabic and vice versa. Interviews were audio-recorded and transcribed using NVivo 12. Thematic coding was also done using NVivo 12 software. Results: Findings identified that social networks can play both direct and indirect roles in influencing mental and emotional health service-seeking behaviours amongst women who are refugees from Syria. Namely, (1) families play large roles in teaching and providing information about Canada’s health system; (2) providers prevent use of resources, while family, friends, and sponsors help; and (3) women feel more welcomed into social networks in Canada than in interim countries. Additionally, (4) social networks act as alternatives to seeking formal mental and emotional health care; and (5) comparing environments from Syria and interim countries helps some women build resilience. Conclusion: The findings of this study explored the stories and experiences of women’s transitions into Canada in relation to their mental and emotional health and social networks. This study explored the importance of considering who women seek out for support and how these groups and individuals can impact women’s decisions to seek out mental and emotional hralth care resources. Avenues for further investigation may answer questions such as: Where should resources be invested? What can be done to foster and facilitate social networks that promote mental health?

Shreya Mahajan (2019). The Influence of Social Networks on Mental and Emotional Health Resource-Seeking Behaviours Amongst Women who are Refugees from Syria. UWSpace. http://hdl.handle.net/10012/15249