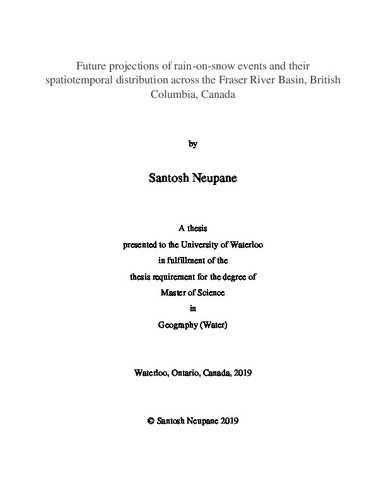 This study analyzes the projected changes of rain-on-snow (ROS) event characteristics (frequency, mechanism and runoff) for the future (2020 – 2099) period with respect to the historical period (1970 – 1999) over the Fraser River Basin (FRB), British Columbia, Canada. The ROS-induced runoff contributes more than half of the total runoff in FRB during the cold season. Simulated snow water equivalent (SWE) and spatial runoff from the Variable Infiltration Capacity (VIC) model are used to estimate the spatial distribution and change of ROS events, based on a multi-model ensemble of climate forcing data following the RCP 8.5 emissions scenario. Prior to assessing the future evolution, VIC is validated by comparing the historical and observed frequency of ROS events seasonally for the period 1970 – 1999. This comparison indicates a similar spatial pattern and seasonal trend in ROS across the basin, but VIC produces about 2-4 times the number of observed ROS events. Future ROS characteristics are assessed in four different elevational bands, and different responses of ROS evolution are found at different elevations. ROS events are projected to decline rapidly in the lowest elevation zone, and to increase in higher elevation zones as a function of changes to the environmental lapse rate. Specifically, wintertime ROS frequency is expected to increase rapidly in higher elevation zones as cold temperatures there produce a consistent snowpack, combined with an increasing frequency of rainfall events driven by projected warming. The correlation between changes of ROS, rainfall, temperature and snow water equivalent (SWE) indicates that increasing temperature drives the decline in future ROS at the lower elevation. In contrast, both temperature and rainfall enhance the positive ROS trend in higher elevation zones. Despite the ongoing warming phenomenon is continuously shrinking snowpack, future ROS evolution is not limited by available snow on the ground and follows an increasing trend until the end of the 21st century. The ROS-induced surface runoff during the cold season is expected to increase in the future, with greater increases at higher elevation. The novel contribution of this research is to provide projections, with an estimate of their uncertainty, of the change in seasonality of streamflow in the FRB, particularly during the winter-spring snowmelt period. The results show that ROS events require careful consideration for future planning in surface water resources management in snowmelt-dominated hydrologic regimes.