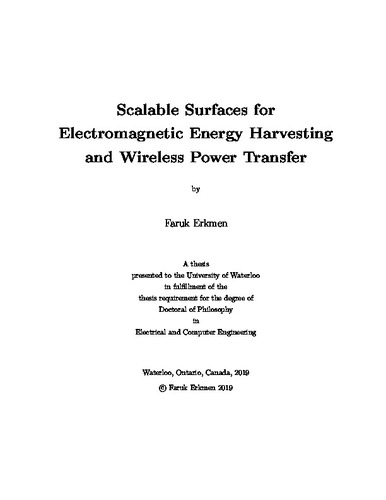 The idea of collecting electromagnetic (EM) energy and converting it into various forms of useful power dates back to the early 20th century. Nikola Tesla's wireless power transfer experiments demonstrated the concept first, which was followed by researchers in Japan and the USA in subsequent decades. In terms of a working prototype, the first rectenna for efficient reception and rectification of microwave power was developed in the early 1960s. Later, the introduction of semiconductor diodes and the invention of Schottky diodes were significant developments towards the realization of practical rectennas. Since then, owing to the numerous applications in different technology domains (i.e. consumer electronics, renewable energy, transportation, internet of things, artificial intelligence, telecommunications, defense & space, biomedical engineering), wireless power transfer and EM energy harvesting have attracted significant interest. Harvesting the ambient EM energy has emerged more recently as a promising application with potential for commercial success and contribution to a sustainable future with renewable energy. Many studies have reported the available ambient power densities measured in several parts of the world demonstrating the potentials and limitations of the concept. Traditional single rectenna structures have found very little use due to their inherent limitations at low power densities. Large rectenna arrays or periodic structures covering larger surface areas have become particularly important in order to efficiently harvest and convert the energy. A rectenna consists of two main functional building blocks: the rectifier and the EM collector. The work in this thesis first focuses on improving these functional blocks individually. Regarding the rectifier function; a balanced full-wave rectifier is proposed where the circuit is differentially fed by two separate antennas. This configuration allows the received power to be rectified and transferred into a load between two antennas, making it convenient to channel the harvested power in rectenna arrays. The proposed concept is demonstrated using an array of T-matched dipole antennas at 2.45 GHz. It is also compared with half-wave rectennas that occupy the same footprint with an identical array layout. Measurement results show that, under the same circumstances, the proposed full-wave rectification performs better than the traditional half-wave rectification and it is indeed suitable for energy harvesting rectenna arrays. Regarding the EM collector; a novel Frequency Selective Surface (FSS) is developed as an absorber surface that accepts 98.5% of the available power and collects 97% of it exclusively on its resistive load (only 1.5% is dissipated as dielectric and metallic losses). To demonstrate its performance, a proof of concept FSS absorber is fabricated and its resistive load is replaced with a matched full-wave rectifier. Measurement results show that the overall Radiation-to-dc conversion efficiency of the complete rectenna system reaches 61%, which is considerably higher than the previously reported FSS based rectennas. Subsequent sections in this thesis expand the energy harvesting surface by adding dual-band and dual-polarization capabilities. Design details and simulation results are provided together with measurement results. Fabricated prototypes are tested and their overall performance is evaluated based on the rectified DC power at the system load as percentage of the available EM power on the physical surface area of the rectenna (i.e. radiation-to-dc conversion efficiency). A key contribution of this thesis is the introduction of the scalability concept for energy harvesting. The periodic absorber surfaces presented in this thesis have built-in channelling features that allow multi-cell configurations to feed a single rectifier. This is demonstrated to be an efficient means to increase the EM collector area per rectifier by effortlessly scaling the surface area while efficiently channelling the collected power. As a result, the number of diodes and diode losses are minimized in the system, leading to higher overall rectenna efficiencies. Real life ambient power densities can be on the order of nW/cm2 and the work in this thesis show that larger EM collectors can significantly mitigate the limitations posed by such low power levels. As an example; when integrated with a multi-cell configuration, an ordinary rectifier made with Schottky diodes was efficiently used at a power density that is less than 1/12th of that would be required if the same rectifier were to be used with a traditional single unit cell approach.