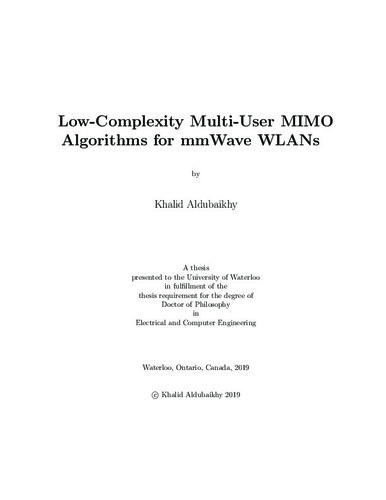 Very high throughput and high-efficiency wireless local area networks (WLANs) have become essential for today's significant global Internet traffic and the expected significant global increase of public WiFi hotspots. Total Internet traffic is predicted to expand 3.7-fold from 2017 to 2022. In 2017, 53% of overall Internet traffic used by WiFi networks, and that number is expected to increase to 56.8% by 2022. Furthermore, 80% of overall Internet traffic is expected to be video traffic by 2022, up from 70% in 2017. WiFi networks are also expected to move towards denser deployment scenarios, such as stadiums, large office buildings, and airports, with very high data rate applications, such as ultra-high definition video wireless streaming. Thus, in order to meet the predicted growth of wireless traffic and the number of WiFi networks in the world, an efficient Internet access solution is required for the current IEEE 802.11 standards. Millimeter wave (mmWave) communication technology is expected to play a crucial role in future wireless networks with large user populations because of the large spectrum band it can provide. To further improve spectrum efficiency over mmWave bands in WLANs with large numbers of users, the IEEE 802.11ay standard was developed from the traditional IEEE 802.11ad standard, aiming to support multi-user MIMO. Propagation challenges associated with mmWave bands necessitate the use of analog beamforming (BF) technologies that employ directional transmissions to determine the optimal sector beam between a transmitter and a receiver. However, the multi-user MIMO is not exploited, since analog BF is limited to a single-user, single-transmission. The computational complexity of achieving traditional multi-user MIMO BF methods, such as full digital BF, in the mmWave systems becomes significant due to the hardware constraints. Our research focuses on how to effectively and efficiently realize multi-user MIMO transmission to improve spectrum efficiency over the IEEE 802.11ay mmWave band system while also resolving the computational complexity challenges for achieving a multi-user MIMO in mmWave systems. This thesis focuses on MAC protocol algorithms and analysis of the IEEE 802.11ay mmWave WLANs to provide multi-user MIMO support in various scenarios to improve the spectrum efficiency and system throughput. Specifically, from a downlink single-hop scenario perspective, a VG algorithm is proposed to schedule simultaneous downlink transmission links while mitigating the multi-user interference with no additional computational complexity. From a downlink multi-hop scenario perspective, a low-complexity MHVG algorithm is conducted to realize simultaneous transmissions and improve the network performance by taking advantage of the spatial reuse in a dense network. The proposed MHVG algorithm permits simultaneous links scheduling and mitigates both the multi-user interference and co-channel interference based only on analog BF information, without the necessity for feedback overhead, such as channel state information (CSI). From an uplink scenario perspective, a low-complexity user selection algorithm, HBF-VG, incorporates user selection with the HBF algorithm to achieve simultaneous uplink transmissions for IEEE 802.11ay mmWave WLANs. With the HBF-VG algorithm, the users can be selected based on an orthogonality criterion instead of collecting CSI from all potential users. We optimize the digital BF to mitigate the residual interference among selected users. Extensive analytical and simulation evaluations are provided to validate the performance of the proposed algorithms with respect to average throughput per time slot, average network throughput, average sum-rate, energy efficiency, signal-to-interference-plus-noise ratio (SINR), and spatial multiplexing gain.