Path Integrals in the Sky: Classical and Quantum Problems with Minimal Assumptions 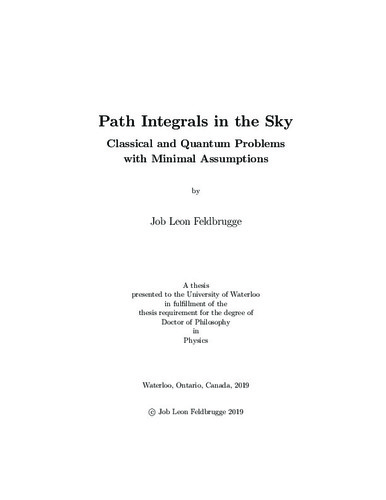 Cosmology has, after the formulation of general relativity, been transformed from a branch of philosophy into an active field in physics. Notwithstanding the significant improvements in our understanding of our Universe, there are still many open questions on both its early and late time evolution. In this thesis, we investigate a range of problems in classical and quantum cosmology, using advanced mathematical tools, and making only minimal assumptions. In particular, we apply Picard-Lefschetz theory, catastrophe theory, infinite dimensional measure theory, and weak-value theory. To study the beginning of the Universe in quantum cosmology, we apply Picard-Lefschetz theory to the Lorentzian path integral for gravity. We analyze both the Hartle-Hawking no-boundary proposal and Vilenkin's tunneling proposal, and demonstrate that the Lorentzian path integral corresponding to the mini-superspace formulation of the two proposals is well-defined. However, when including fluctuations, we show that the path integral predicts the existence of large fluctuations. This indicates that the Universe cannot have had a smooth beginning in Euclidean de Sitter space. In response to these conclusions, the scientific community has made a series of adapted formulations of the no-boundary and tunneling proposals. We show that these new proposals suffer from similar issues. Second, we generalize the weak-value interpretation of quantum mechanics to relativistic systems. We apply this formalism to a relativistic quantum particle in a constant electric field. We analyze the evolution of the relativistic particle in both the classical and the quantum regime and evaluate the back-reaction of the Schwinger effect on the electric field in $1+1$-dimensional spacetime, using analytical methods. In addition, we develop a numerical method to evaluate both the wavefunction and the corresponding weak-values in more general electric and magnetic fields. We conclude the quantum part of this thesis with a chapter on Lorentzian path integrals. We propose a new definition of the real-time path integral in terms of Brownian motion on the Lefschetz thimble of the theory. We prove the existence of a $\sigma$-measure for the path integral of the non-relativistic free particle, the (inverted) harmonic oscillator, and the relativistic particle in a range of potentials. We also describe how this proposal extends to more general path integrals. In the classical part of this thesis, we analyze two problems in late-time cosmology. Multi-dimensional oscillatory integrals are prevalent in physics, but notoriously difficult to evaluate. We develop a new numerical method, based on multi-dimensional Picard-Lefschetz theory, for the evaluation of these integrals. The virtue of this method is that its efficiency increases when integrals become more oscillatory. The method is applied to interference patterns of lensed images near caustics described by catastrophe theory. This analysis can help us understand the lensing of astrophysical sources by plasma lenses, which is especially relevant in light of the proposed lensing mechanism for fast radio bursts. Finally, we analyze large-scale structure formation in terms of catastrophe theory. We show that the geometric structure of the three-dimensional cosmic-web is determined by both the eigenvalue and the eigenvector fields of the deformation tensor. We formulate caustic conditions, classifying caustics using properties of these fields. When applied to the Zel'dovich approximation of structure formation, the caustic conditions enable us to construct a caustic skeleton of the three-dimensional cosmic-web in terms of the initial conditions.