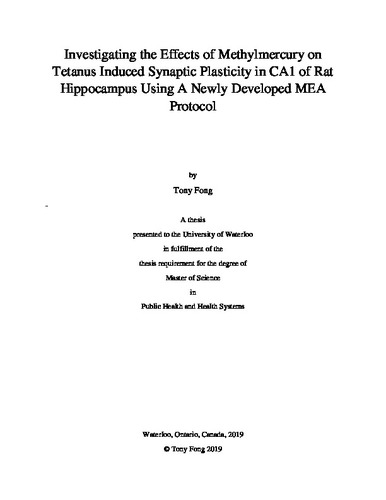 Background: Methylmercury (MeHg) is a neurotoxicant that induces sensorimotor dysfunction at high levels. However, the majority of the world’s populations are exposed at lower levels, at which the effects and mechanisms are less certain. Evidence from the past few decades suggests that low levels of MeHg may impair learning and memory. Long-term potentiation (LTP) in acute hippocampal slices is a cellular model of memory and learning. Hence, LTP may be a useful model to study the detrimental effects and mechanisms of MeHg on learning and memory. However, LTP studies often report large variability in potentiation magnitude between studies, making it difficult to consistently detect small effects. The large variability may be, in part, due to a disregard of the recording distance to the soma and the slice origin along the longitudinal axis. Objectives: 1. To develop a more precise LTP protocol which incorporates the distance of the recording point to the soma and slice of origin along the longitudinal axis. 2. Using the newly developed experimental protocol to investigate the effects of MeHg, at levels that do not affect basal transmission, on synaptic plasticity. Methods: Evoked responses at different distances to the neuronal soma in the CA1 region of acute rat hippocampal slices stratified by pole of origin along the longitudinal axis were recorded using a multi-electrode array. LTP was induced with a tetanus protocol (2 trains at 100 Hz, intertrain duration: 20 s). Notable components of the evoked waveform across the experiment were identified using principal component analysis. In the toxicity study, different doses of MeHg (0, 0.1, 1, 5 μM) containing ACSF was perfused to the slice for 20 minutes before LTP induction. In addition, slices were exposed to APV (50 nM) as a positive control. All statistical analyses were conducted using a random intercept linear mixed model. Results: Two components, the field excitatory post-synaptic potentiation (fEPSP) and the positive going aspect (PGA), were identified in the PCA. An fEPSP potentiation gradient in which the degree of potentiation was inversely proportional to the distance of the recording point to the soma was found more prominent in ventral slices but less in dorsal slices. In both dorsal and ventral slices, the PGA was potentiated at distal recording points while depressed at proximal recording points to the soma. In slices from both poles, both fEPSP and PGA changes post-tetanus were found to be mainly driven by NMDA receptors. Interestingly, fEPSP potentiation in dorsal slices showed to contain an NMDA-independent component. Furthermore, preliminary results suggest that 5 μM MeHg may depress fEPSP potentiation and increase PGA potentiation post-tetanus. Conclusion: The current study calls for the attention to record and analysis both the fEPSP and PGA in LTP studies. Most importantly, recording and analysis should be stratified by: i) recording distance to the neuronal soma and ii) origin of the slice along the longitudinal axis. Furthermore, the developed method is showing some promises in studying the effects of MeHg on learning and memory.