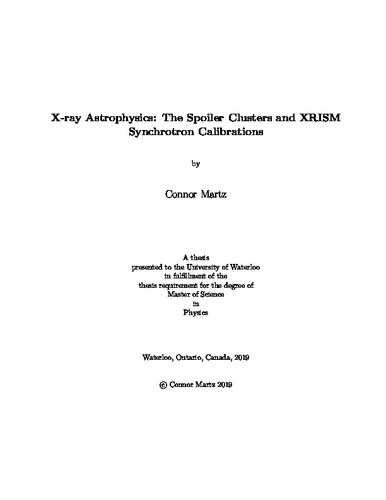 Cool core galaxy clusters hosting brightest cluster galaxies (BCGs) in their centres radiate away their energy on timescales of less than 10^9 yr. If cooling wasn't offset by some form of heating, the hot atmosphere would cool and continuously form stars at rates of hundreds to thousands of solar masses per year. However, observations by Chandra have revealed no evidence of gas cooling at these expected rates. Instead, predicted cooling rates are counteracted via mechanical feedback from active galactic nuclei (AGN), which heats the intracluster medium (ICM) and suppresses cooling. Observations have shown that nebular emission and molecular gas in BCGs are associated with rising X-ray bubbles inflated by radio jets launched by massive black holes. Molecular clouds have either condensed from low entropy gas being uplifted in the wakes of X-ray bubbles or can be lifted directly. In this thesis I present an analysis of a sample of five cool-core galaxy clusters (A2029, A2151, A2107, EXO0422-086, RBS0533) observed with the Chandra X-ray Observatory selected on the basis of having an upper limit on Halpha emission in the ACCEPT database, yet with short central cooling times. I extract thermodynamic profiles for each cluster and show that the central cooling time and entropy falls below 1 Gyr and 30 kev cm^2 respectively. I thoroughly explore each cluster for evidence of X-ray bubbles, and discuss a method of detecting and confirming the significance of bubbles. Only RBS0533 has detectable radio/X-ray bubbles which are commonly associated with cooling atmospheres. Although, despite its prominent X-ray bubble, RBS0533 lacks significant levels of molecular gas. I argue that cold gas is absent at appreciable levels in these systems because radio bubbles are either absent or in the case of RBS0533, its radio bubbles are unable to lift low entropy atmospheric gas to an altitude where the ratio of the cooling time to the free-fall time falls below unity. I also search for signatures of uplifted gas in our sample by creating metallicity maps and extracting thermodynamic profiles along radio jet axis and ``off" of radio jet axis' to determine if metal enriched gas preferentially lies along the former. Inspection of maps and subsequent statistical analysis of profiles confirms that metal-rich plasma does not preferentially lie along any direction. Finally, I present an analysis of my work during a filter calibration project for the X-ray Imaging and Spectroscopy Mission (XRISM), where I assisted in the calibration of a set of Resolve optical blocking filters (IVCS-6 and OVCS-7A) using metrology synchrotron beamlines at the Canadian Light Source and Advanced Light Source.