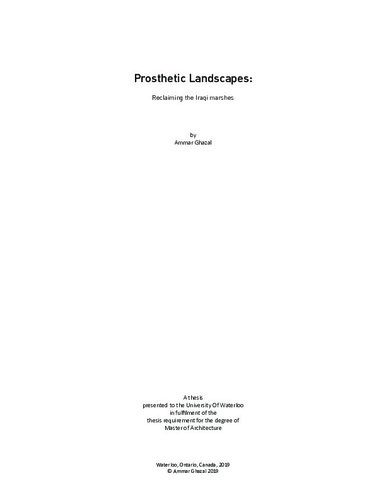 Hidden within the sands of the middle eastern desert, there lies a vast aging Petropolis, occupying territories in southern Iraq through the injection of infrastructure such as mechanical drills and mobile machinery. The “West Qurna” Petropolis oil field is situated in the southern part of the Iraqi marshlands. marshlands that once consisted of freshwater bodies were transformed into a desert landscape by the oil industry, through a series of terraformation projects for the past three decades. With the current oil production capacity in Iraq, the projected abundance of oil is expected to lead to the suspension of any oil extraction processes near 2050. The expulsion of the industry from the marshlands will render theseoil terraformed strata obsolete and abandoned in the long run due to low maintenance and upkeep. In reference to multiple instances in history where the Iraqi government failed to take responsibility of the state of affairs, this thesis proposes a scenario where the Marsh-Arabs (Me’daan) who were forced to abandon the marshes will be reclaiming land ownership from the private industry by squatting. The flexible nature of their resettlement will introduce new tools for inhabitation, by repurposing oil drills and mechanical equipment into construction tools that could mould silt terrains into a hybrid landscape, adjusted and manipulated to be adaptable over multiple scenarios.