GREY TO GREEN 13 GATES TO THE GREENBELT 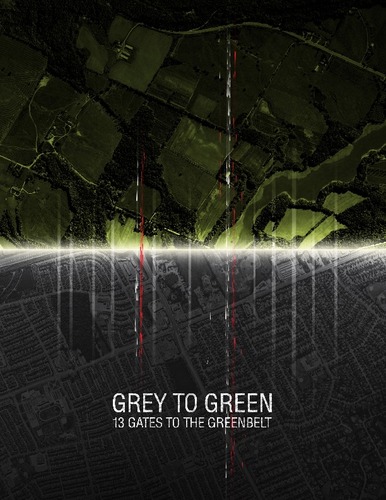 The Greenbelt was created by the Government of Ontario in 2005 to protect working farms, wetlands, natural habitats, woods and river valleys that surround the Greater Toronto Area (GTA). Its vast 8000 square kilometers connects the Niagara escarpments in the west with the Oak Ridges Moraine in the east. Less than 20 years after its formation, its survival is threatened by the very same suburban sprawl that it intended to contain. This thesis poses the question: how can the Greenbelt declare and assert its legitimate boundaries and defend itself against incursions from multiple stakeholders? Adding to the complexity of the current situation, many politicians ununhesitatingly blame the Greenbelt for causing rampant escalation of housing prices in the Greater Toronto Area (GTA) while at the same time advocating policies that favour both densification and building of new highways as a solution to urban sprawl. This thesis proposes a series of landscape-scaled intervention along the 13 highways that intersect the Greenbelt. Because these highways carry 668,400 cars a day throught the Greenbelt, they offer an opportunity for bringing a precise awareness about the amorphous Greenbelt boundaries to the citizens of southern Ontario as they traverse its otherwise invisible boundaries. The thesis posits that by bringing awareness to these "gates," it is possible to create a more visible Greenbelt that can lead the public to better understand the need to protect the fragile ecology of these lands by helping them to become more visible, more respected, and more ultimately likely to survive and thrive.