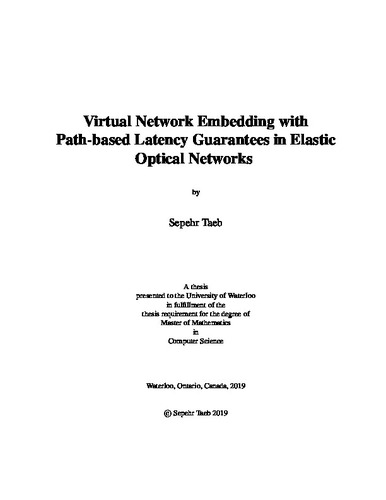 Elastic Optical Network (EON) virtualization has recently emerged as an enabling technology for 5G network slicing. A fundamental problem in EON slicing (known as Virtual Network Embedding (VNE)) is how to efficiently map a virtual network (VN) on a substrate EON characterized by elastic transponders and flexible grid. Since a number of 5G services will have strict latency requirements, the VNE problem in EONs must be solved while guaranteeing latency targets. In existing literature, latency has always been modeled as a constraint applied on the virtual links of the VN. In contrast, we argue in favor of an alternate modeling that constrains the latency of virtual paths. Constraining latency over virtual paths (vs. over virtual links) poses additional modeling and algorithmic challenges to the VNE problem, but allows us to capture end-to-end service requirements. In this thesis, we first model latency in an EON by identifying the different factors that contribute to it. We formulate the VNE problem with latency guarantees as an Integer Linear Program (ILP) and propose a heuristic solution that can scale to large problem instances. We evaluated our proposed solutions using real network topologies and realistic transmission configurations under different scenarios and observed that, for a given VN request, latency constraints can be guaranteed by accepting a modest increase in network resource utilization. Latency constraints instead showed a higher impact on VN blocking ratio in dynamic scenarios.