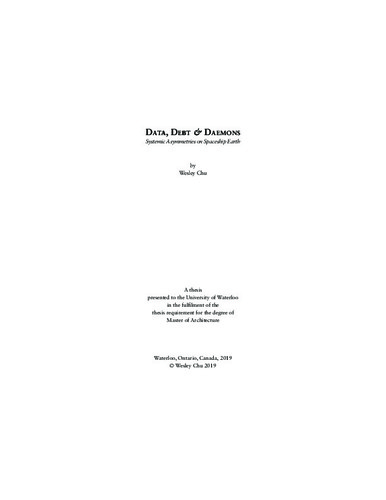 Day by day, the rate at which we create new data increases exponentially. Our capacity to learn cannot keep up. We are tiny members of a vast universal network, incapable of discerning cause and effect. Instead, we develop simplified narratives, leaving ourselves misguided yet complacent. The information management trade of both physical and intellectual property has become more vital to global economies than ever, replacing physical resources and manufacturing. Through our deepening reliance on specialization, we forfeit agency over our own homes while accruing unprecedented debt. Housing costs have risen dramatically compared to wages, despite reportedly successful economies. Citizens were supposed to have the ability to participate in financial markets using their property as collateral. This seduced many into the ideologies of unregulated capitalism. However, by the 21st century, these systems had become unrecognizable mutilations of their intended designs. The momentum we have gathered in the past century has thrust us on an unsustainable trajectory we have little hope of predicting. We laid the foundation for Western economic dominance with technology, monetary policy, and globalization, but we did so using incentive structures that exacerbated wealth inequality. These systems integrate digital technology into both our physical and virtual spaces, operating on invisible planes that bypass our senses. The radical novelty of computers has entangled us in niche engineered concepts that few understand. They create a lack of accountability in Big Tech that policy-makers are ill-prepared for. We cannot ensure an equitable distribution of the leverage or stakes when we entrust brokers, politicians, traders, and captains of industry to make complex decisions for us without bearing the risks of their consequences. Our long-term welfare, including our future habitation on this planet, is not visceral enough to force effective reform. Both our physical and our digital spaces are designed, built, evaluated, and monitored on asymmetric principles, causing disasters that future generations and the least fortunate always pay for. How did we normalize this moral hazard? How can digital systems born out of frustration with modern policy combat these issues, without disrupting the benefits of a techno-utopia? How can they promote efficiency, security, and transparency in the spaces we call home?