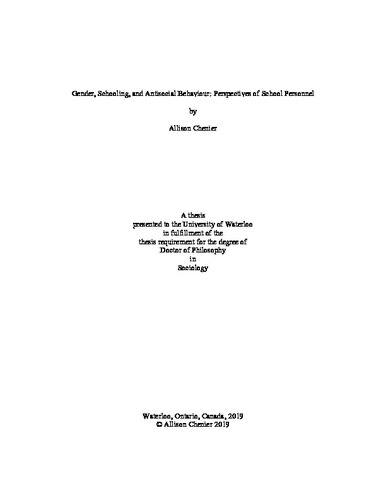 This thesis examines gender, schooling, and antisocial behaviour and aims to shed light on how gender contextualizes the interpretations and reactions by personnel working in secondary schools. Drawing on data from 49 semi-structured interviews with school personnel working in a public school board in Southwestern Ontario collected in 2011 and 2016, I examine the ways that gender shapes the interpretation of female antisocial behaviour in schools and consider the specific ways that personnel respond to that behaviour. First, I use Milner’s (2004) theory of status relations as an analytic framework to examine common adolescent antisocial behaviour such as theft, relational aggression, and sexualized social media use. The theory of status relations posits that since youth are unable to achieve political and economic power due to their age, they gain status through peer group status systems. Thus, while behaviours are interpreted by those working in schools as antisocial, the behaviours can also be understood as attempts on the part of adolescents to gain status. Through a grounded theory analysis, I argue that those working in schools interpret the status behaviours of male and female students differently, perceiving the behaviour of girls to be more problematic and aberrant than boys. As well, I suggest that the proliferation of technology and social media adds a new dimension to status behaviours, as many of the status behaviours involve access to technology or occur via social media. Next, I draw on feminist criminology and gender-responsive programming literature to examine how school resource officers (SROs) interpret and make sense of their interactions with female students, especially as it compares to the interpretations of other school personnel. I suggest that SROs are both similar and distinct from other school personnel in their perceptions of female students, and particularly dissimilar in their perceptions of risk of gender-based violence. SROs in this study suggest that responding to gender-based violence is a common part of their role, whereas other school personnel view it as uncommon. I then argue that the SRO program in schools contains elements deemed important in the gender-based programming literature, especially compared to officers working on patrol. SROs suggest that working in schools affords them the time necessary to build trust with youth, ultimately improving youth-police relations. I argue further that the studies of school safety should be expanded beyond victimization in the form of bullying, fighting, and extreme cases of school violence to include gender-based victimization. Finally, I examine how the organization of schools intersects with girls’ antisocial behaviour in schools. Drawing on concepts from organization deviance derived inductively from the data, I argue that the loosely coupled nature of secondary schools has gendered implications, particularly in the case of vulnerability to victimization in human trafficking. Elements of the organization of schools such as structural secrecy can lead to missed opportunities for school personnel to intervene with students at-risk for involvement in human trafficking, as personnel may not share vital information on warning signs. The implication of the results is that all loosely coupled organizations, such as the police, may be unwittingly failing to intervene on behalf of vulnerable girls. The thesis concludes with areas for future research and recommendations in the areas of policy and training.