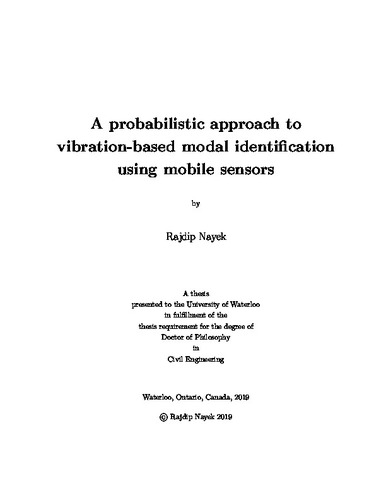 Vibration-based modal identification is the process of analyzing vibration measurements in order to identify the modal properties of the structure, namely the modal frequencies, damping ratios, and mode shapes. The quality of the estimated modal parameters, particularly the mode shapes, depends to a great extent on the spatial resolution of the measurements on the structure. Traditionally, measurements are obtained using networks of static sensors (i.e., sensors that remain fixed at certain locations on the structure) which are prone to poor spatial resolution when only using a few sensors. To circumvent this issue, a large, dense network is required which has negative cost and implementation implications. An appealing alternative to large static sensor networks is the use of a much smaller network of mobile sensors. Mobile sensors are sensors mounted on carrier vehicles (such as robots or cars) that can be sequentially conveyed to various locations on a structure, thereby achieving dense spatial resolution with relatively few sensors. Two measurement strategies can be used with mobile sensors: re-configurable mobile sensing, which involves repositioning the mobile sensors in a series of static configurations and collecting measurement data while not in motion, and in-motion mobile sensing which involves continuously collecting measurement data while the sensors traverse the spatial domain of the structure. Conventional modal identification methods - developed for use with measurement data from static sensor networks - are not directly compatible with data obtained from mobile sensor networks. This motivates the need to develop new modal identification algorithms specifically to process mobile sensor data. Furthermore, due to various factors such as motion over rough surfaces, data transmission errors, vehicle-structure interaction, mobile sensors are typically subjected to more sources of error compared to static sensors. Therefore, quantifying the uncertainties in the modal parameter estimates is important and should be included in the algorithms using mobile sensor data. The current state of research on system identification methods using mobile sensors is still developing. This thesis addresses some of the theoretical and algorithmic challenges encountered in system identification using both re-configurable and in-motion mobile sensing strategies. In the context of re-configurable sensing, the feasibility of using a single mobile actuator-sensor pair for input-output modal identification of a structure is studied. An input-output balance method is developed and it is shown that high-resolution mass-normalized mode shapes can be obtained with a single mobile actuator-sensor pair and the approximate knowledge of the signs of the mode shapes. The problem of output-only modal identification using in-motion mobile sensors is addressed from two perspectives: an incomplete-data perspective and a complete-data perspective. From an incomplete data perspective, the data matrix generated by mobile sensors is treated as a static sensor data matrix with missing entries. A Bayesian inference framework based on a stochastic linear time-invariant state-space model is introduced to obtain the posterior distribution over the modal parameters. Three computational algorithms, namely the Expectation-Maximization (EM), the Variational Bayes (VB) and the Gibbs Sampler (GS) are employed for modal parameter estimation from the data matrix with missing entries. The EM provides point estimates whereas VB and GS provide posterior distributions of the modal parameters. From a complete-data perspective, the mobile sensor data obtained from a network of in-motion mobile sensors are represented by a single stacked data matrix characterized by spatial discontinuities along each sensor channel. To facilitate modal parameter estimation with the stacked data matrix, a novel stochastic linear time-varying modal state model (MSM) is proposed. The EM, VB and GS algorithms are suitably modified to facilitate inference of the modal parameters via the MSM. The modal parameter estimation framework employing the MSM is shown to be flexible and capable of providing high-resolution mode shape estimates along with posterior uncertainties. Finally, a methodology to suppress the effect of carrier-vehicle dynamics on the recorded mobile sensor responses is proposed. The vehicle responses (i.e., responses recorded by a sensor mounted on top of the carrier-vehicle) are modified versions of the true contact-point structural responses due to the low-pass filtering effect of the vehicle dynamics. Contact-point responses - the responses at the contact point of the vehicle with the structure - are deemed to be better suited for modal identification than measured vehicle responses. Using the knowledge of the vehicle system, the problem of estimating the contact-point response from the measured vehicle response is cast as an input reconstruction problem, and a Gaussian process latent force model (GPLFM) with Kalman filtering is proposed to recover the contact-point responses. Through various numerical studies, it is shown that the recovered contact-point responses are superior - the effect of vehicle dynamics is reduced and the prominence of higher structural modes is significantly improved. In summary, this thesis presents a suite of numerical algorithms for modal parameter estimation using mobile sensor data. The performances of the proposed numerical algorithms are evaluated through a series of numerical simulations and bench-scale experimental tests. The results (i) confirm the advantages of mobile sensing over large static sensor networks, (ii) verify the different perspectives of analyzing mobile sensor data, and (iii) demonstrate the capability of the algorithms to include uncertainty quantification.