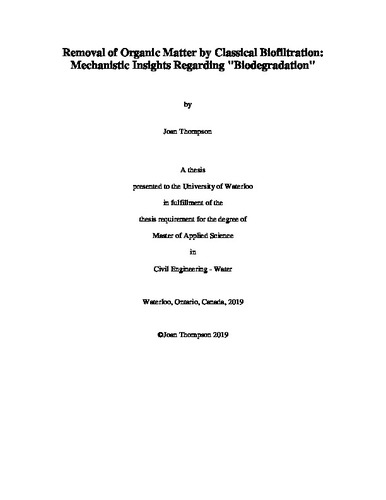 Pilot-scale biofiltration experiments were conducted at the Region of Waterloo’s Mannheim Drinking Water Treatment Plant to inform the scientific and operational understanding of drinking water treatment by biologically-active GAC/sand filtration processes. Three dual-media granular activated carbon (GAC)/sand biofilters and one multi-media GAC-capped anthracite/sand biofilter media configuration were investigated. Both new GAC and GAC that had been biologically active for five years were used. The performance differences between a new, highly adsorptive GAC filter that is undergoing biological acclimation, and a biofilter that is stacked with older, biologically-active GAC media were investigated to increase the mechanistic understanding of natural organic matter (NOM) removal by biofiltration. The performance of a cost-effective, new GAC-capped anthracite/sand biofilter compared to a GAC/sand biofilter also was investigated. Performance was assessed using adenosine tri-phosphate (ATP) concentration associated with attached biomass in the filter media, dissolved organic carbon (DOC), UVabsorbance, and characterization by liquid chromatography-organic carbon detection (LC-OCD) fractionation. The filters were monitored for their performance in headloss accumulation and turbidity removal. Water from the full-scale water treatment plant was coagulated, flocculated, clarified by settling, and then ozonated. It was then directed to the pilot plant filters, which contained the same depth of media, but were operated separately from the full-scale plant. The experiments were conducted from June to September 2018, during warm water conditions (18–27°C). As expected, the new GAC/sand filter removed substantially more DOC, UV-absorbing compounds, and humic substances than did the biologically-active GAC. There was also a typical pattern of biological acclimation in this filter, as there was high DOC removal, followed by a decline, and then a steady-state period. DOC removal during the steady-state period in the new filter was 25 to 30% on average, which was significantly higher than that in the filter containing media that had been biologically active for five years (13% on average), suggesting that DOC removal might decline over years of service. Interestingly, the new GAC/sand filter did not out-perform the biologically-active GAC/sand filter in biopolymer removal, possibly due to the size (>20 kDa) and shape of these compounds. This observation also suggests that biodegradation of biopolymers (in contrast to other compounds) occurs directly in biologically-active GAC filters, and not necessarily by bioregeneration (freeing up of adsorptive sites). Further, compared to biologically-active GAC/sand, there was no outright disadvantage to running a GACcapped anthracite/sand biofilter. One month into the experiment, the backwashing procedure was altered to improve filter run times. The increased vigorousness caused the biofilm in the GAC-capped anthracite/sand filter to decrease temporarily, and it also caused a brief decrease in the DOC removal, whereas the GAC/sand biofilter was not affected by the backwashing change. Overall, it was found that (1) the new GAC filter demonstrated a trend in DOC removal that was expected, with the added finding that the biodegradation or adsorptive capacity declines over a period of several years after acclimation (2) adsorption did not enhance the removal of biopolymers, though they were removed by biofiltration, indicating that biodegradation may occur directly and not necessarily by bioregeneration (adsorption and desorption by biodegradation), and (3) as configured, the GAC/sand biofilter was more effective in removing DOC than the GAC-capped anthracite biofilter.