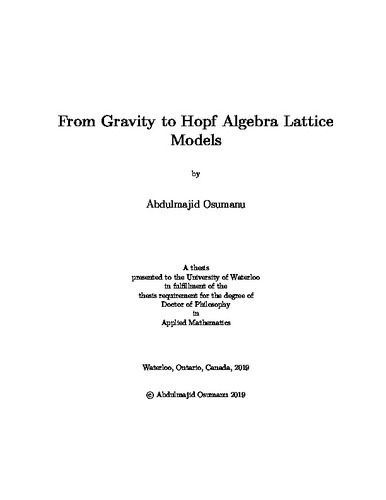 This thesis addresses three different problems related to quantum gravity. In the first problem we will discuss the two natural ways to encode gravity through geometric structures. One is the much acclaimed Einstein's general relativity and the other is teleparallel gravity, where torsion as opposed to curvature encodes the dynamics of gravitational degrees of freedom. We will show that the Einstein--Cartan action, the general relativity first-order formulation, can also be seen as the first-order formulation of teleparallel gravity. We then discuss how the discretization of the Einstein-Cartan action in three dimensional spacetime affects the equivalence of these two formulations. We investigate then how one can derive the quantum group structure in loop quantum gravity with a non-zero cosmological constant $\Lambda$ from the continuum action. It is well known that the cosmological constant implies a quantum group deformation of the internal gauge group at the quantum level, but it is usually introduced by hand. We show for the first time that we can derive this q-deformation from the 3d gravity action using the discretization scheme already discussed above. The key element is to find the right set of variables to discretize. The discretized symplectic form is then the one for the Heisenberg double which upon quantization generates the quantum group structure. This allows to see 3d loop quantum gravity (with topological defects) as a specific Hopf algebra lattice theory. The last part of the thesis studies Hopf algebras lattice models, defined as representations for certain quantum groups. We propose a set of requirements for these models which should allow to generalize the construction to different types of quantum groups. We show how the Kitaev's quantum double model satisfies such requirements. We then propose a new version of the Kitaev model based on Majid's bicrossproduct quantum group. The construction of this new model is relatively natural as it relies on the use of the covariant Hopf algebra actions. We obtain an exactly solvable Hamiltonian for the model and provide a definition of the ground state in terms of a tensor network representation. Finally, we discuss how Kitaev's quantum double model and its dual version can be related to the two formulations of gravity.