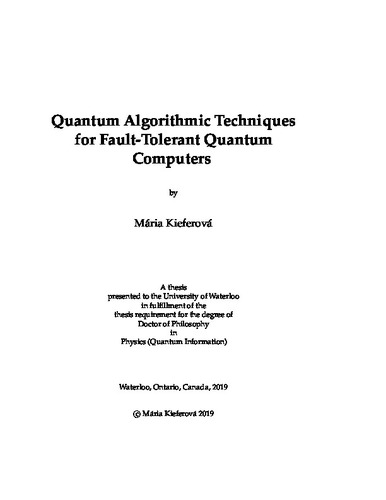 Quantum computers have the potential to push the limits of computation in areas such as quantum chemistry, cryptography, optimization, and machine learning. Even though many quantum algorithms show asymptotic improvement compared to classical ones, the overhead of running quantum computers limits when quantum computing becomes useful. Thus, by optimizing components of quantum algorithms, we can bring the regime of quantum advantage closer. My work focuses on developing efficient subroutines for quantum computation. I focus specifically on algorithms for scalable, fault-tolerant quantum computers. While it is possible that even noisy quantum computers can outperform classical ones for specific tasks, high-depth and therefore fault-tolerance is likely required for most applications. In this thesis, I introduce three sets of techniques that can be used by themselves or as subroutines in other algorithms. The first components are coherent versions of classical sort and shuffle. We require that a quantum shuffle prepares a uniform superposition over all permutations of a sequence. The quantum sort is used within the shuffle and as well as in the next algorithm in this thesis. The quantum shuffle is an essential part of state preparation for quantum chemistry computation in first quantization. Second, I review the progress of Hamiltonian simulations and give a new algorithm for simulating time-dependent Hamiltonians. This algorithm scales polylogarithmic in the inverse error, and the query complexity does not depend on the derivatives of the Hamiltonian. A time-dependent Hamiltonian simulation was recently used for interaction picture simulation with applications to quantum chemistry. Next, I present a fully quantum Boltzmann machine. I show that our algorithm can train on quantum data and learn a classical description of quantum states. This type of machine learning can be used for tomography, Hamiltonian learning, and approximate quantum cloning.