Physical Modelling and the Associated Acoustic Behaviour of Trumpets and Trombones 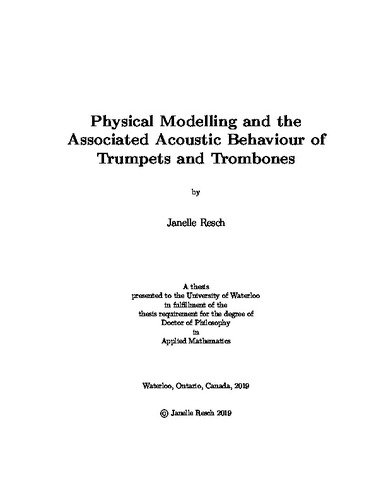 Accurately modelling the production of realistic musical notes in brass instruments is no easy task. Compared to woodwind instruments, brass instruments are considerably longer and constructed with bends, valves or coils, a mouthpiece with a cup rather than a reed or double-reed, as well as a large flare. Mathematically, this means that the sound wave propagation through the instrument could exhibit various nonlinear behaviours that are not examined within the fi eld of linear acoustics. In this thesis, we attempt to accurately model the timbre of musical notes produced on the trumpet and trombone and study the associated acoustic behaviours of both instruments. To accomplish this, we investigate the relevance of the interaction between the player and instrument to ensure the problem is computationally reasonable, as we need to decipher what aspects and parameters can be neglected, and which are essential to consider. This was done through a series of physical experiments and numerical studies, which also provided verification of previous claims and findings published in the literature. Ultimately, we determined there are factors more essential to incorporate over modelling vibroacoustic and thermoviscous effects. We therefore focus on these components and model the nonlinear wave propagation through the instruments in the time-domain using the compressible Euler equations, and numerically solve the system via the discontinuous Galerkin method. Several musical notes played at various dynamic levels are simulated. The numerical solutions are compared against the measured data to evaluate how well the timbre of the different musical tones can be recreated. Although several simplifying assumptions were made, we found that our model produces the most accurate results compared to previous findings. Furthermore, to our knowledge, we are the first to numerically reproduce (from real data) the production of shock waves in the trombone, thereby theoretically and numerically verifying the experimental work published by Hirschberg et al. in 1996 (https://doi.org/10.1121/1.414698).